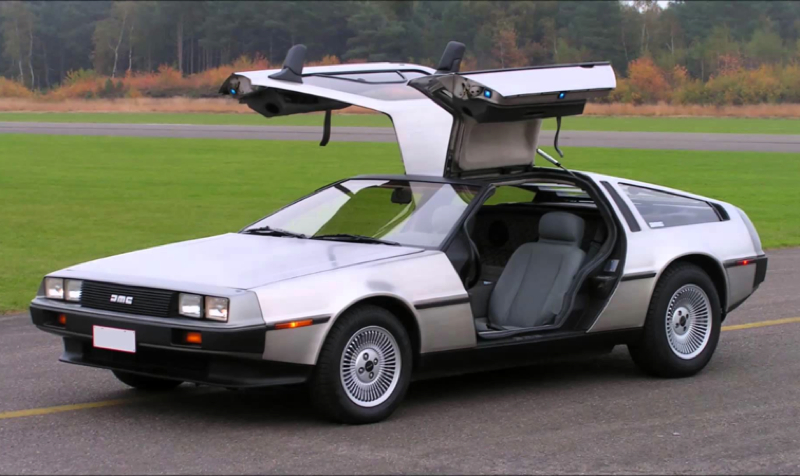 Great Scott, the future has nearly arrived! October 21, 2015 is a date burned into the minds of Back to the Future fans as the day Doc Brown and Marty McFly travel to in the movie’s 1989 sequel. In honor of that day approaching, Speedville put together a special Ride of the Week about the duo’s time machine – the DeLorean DMC-12.

The DeLorean DMC-12 (commonly referred to simply as the DeLorean as it was the only model ever produced by the company) is a sports car manufactured by John DeLorean’s DeLorean Motor Company for the American market from 1981–’83. The car features gull-wing doors and an innovative fiberglass chassis and underbody structure, along with a brushed stainless steel body. The car became widely known and iconic for its appearance, modified as a time machine, in the Back to the Future film trilogy.

Six DeLorean chassis were used during the production of the movie starring Michael J. Fox and Christopher Lloyd, along with one manufactured out of fiberglass for scenes where a full-size DeLorean was needed to “fly” on-screen; only three of the cars still exist, with one that was destroyed at the end of Back to the Future Part III, two additional were abandoned, and the fiberglass replica was scrapped. Universal Studios owns two of the remaining cars, occasionally putting them on display or using them for other productions, and the last resides in a private collection after having been extensively restored. 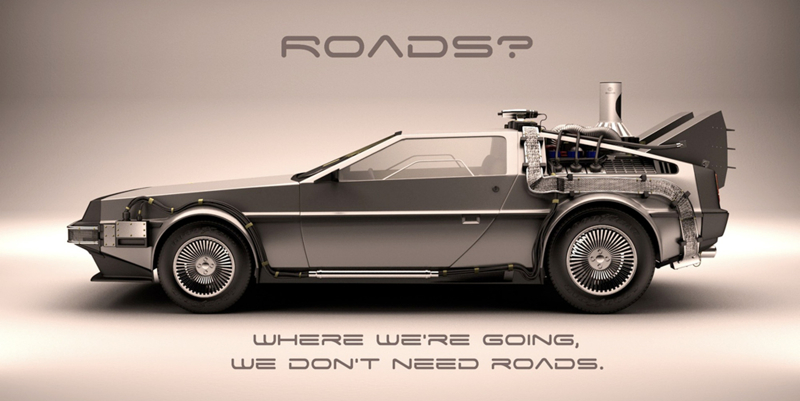 A number of production DeLoreans have been modified by the aftermarket into Back To The Future time machine replicas whose bodies and interiors are modified to mirror the appearance and functions of the film cars.

The first prototype of the DeLorean appeared in October 1976, and production officially began in 1981 in Dunmurry, a suburb of south west Belfast, Northern Ireland (with the first DMC-12 rolling off the production line on January 21). During its production, several features of the car were changed, such as the hood style, wheels and interior. Approximately 9,000 DMC-12s were made before production halted in early 1983.

The DMC-12 was the only model produced by the company, which would go into liquidation as the U.S. car market went through its largest slump since the 1930s. In 2007, about 6,500 DeLorean Motor cars were believed still to exist.

The DMC-12 features a number of unusual construction details, including gull-wing doors, unpainted stainless-steel body panels, and a rear-mounted engine. Except for three cars plated in 24-carat gold, all DMC-12s left the factory uncovered by paint or clear-coat. Painted DeLoreans do exist, although these were all painted after the cars were purchased from the factory. Several hundred DMCs were produced without stainless panels, for training workers, and are referred to as “black cars” or “mules”, in reference to the black fiberglass panels instead of stainless, though these were never marketed. The stainless steel panels are fixed to a glass-reinforced plastic (GRP, fiberglass) monocoque underbody. The underbody is affixed to a double-Y frame chassis, derived from the Lotus Esprit platform.

Another unusual feature of the DMC-12 is its gull-wing doors. The common problem of supporting the weight of gull-wing doors was solved by other manufacturers with lightweight doors in the Mercedes-Benz 300SL and a hydraulic pump in the Bricklin SV-1, although these designs had structural or convenience disadvantages. The DMC-12 features heavy doors supported by cryogenically preset torsion bars and gas-charged struts. These torsion bars were developed by Grumman Aerospace (and built by Unbrako in the UK, a division of SPS Technologies of Jenkintown, PA) to withstand the stresses of supporting the doors. A popular misconception of the DMC-12’s gull-wing doors is that they require far more side clearance to open relative to ordinary side-hinge doors, such as when parked in a parking lot. In fact, the opposite is true: the DMC-12 requires far less clearance than side-hinge doors, and this can be physically demonstrated. These doors, when opening, only require 11 inches (28 cm) clearance outside the line of the car, making opening and closing the doors in crowded spaces relatively easy. Much like the doors fitted to the Lamborghini Countach, the DMC-12 doors featured small cutout windows, because full-sized windows would not be fully retractable within the short door panels. Additionally, the doors featured red and amber “safety” lights around the perimeter. These lights illuminated when the door was open and could be seen from the front, rear or side of the vehicle at night or low light situations.

The engine is a Peugeot-Renault-Volvo (PRV) 2.85 liter V6 which was designed and built under special contract with the DMC Company. These PRV engines were a development of the 2.7 liter V6 in the Renault 30, and were built in the PRV Factory in Douvrin, Northern France. The gearbox, also designed by PRV, was built at the Renault facility near Caen in Normandy. The engines and gearboxes were shipped weekly by sea from the PRV Factories to the DMC Factory in Dunmurry, Northern Ireland.

The underbody and suspension of the DMC-12 were a four-wheel independent suspension, coil springs, and telescopic shock absorbers. The front suspension used double wishbones, while the rear was a multi-link setup. Steering was rack and pinion, and DMC-12s were originally fitted with cast alloy wheels. These were fitted with Goodyear NCT steel-belted radial tires. Because the engine is mounted in the very rear of the vehicle, the DMC-12 has a 35%–65% front–rear weight distribution. The DMC-12 features power-assisted disc brakes on all wheels.

The car was named the DMC-12 because of its intended original price of $12,000. New DMC-12s had a suggested retail price of $25,000 ($650 more when equipped with an automatic transmission); this is equivalent to approximately $64,852 in 2014. There were extensive waiting lists of people willing to pay up to $10,000 above the list price; however, after the collapse of the DeLorean Motor Company, unsold cars could be purchased for under the retail price.

Now that the “future” is nearly here, we can’t say it’s quite how the movie predicted it would be, but the DeLorean lives on. And we’re glad it does.