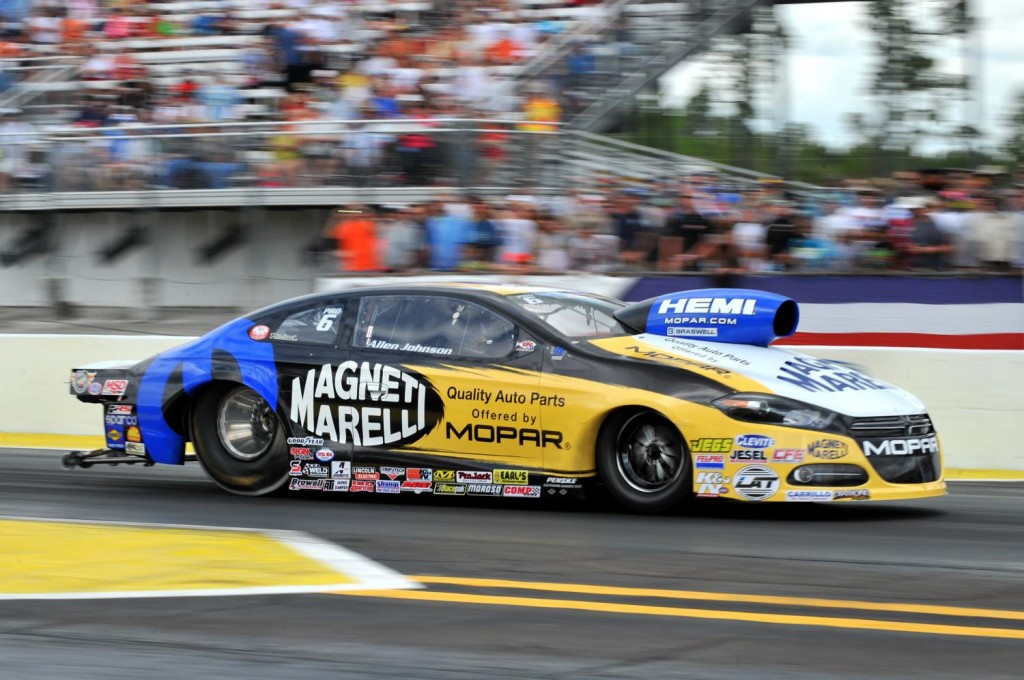 In the semis Capps emerged victorious in the ultimate nail biter, edging out No. 4 qualifier Tim Wilkerson on a holeshot by just one thousandth of a second. With a 4.120/308.71 to Wilkerson’s quicker and faster 4.112/308.85, once again the Mopar-powered Dodge driver’s reflexes off the start proved the difference, his .066 reaction time to his opponent’s .074 providing the margin of victory. In his 86th career Funny Car final round appearance, Capps’ 4.115/311.05 beat Hale’s 4.208/289.32 to the stripe earning him a 43rd Funny Car victory to tie him for second on the all-time list with Tony Pedregon.

Capps jokingly added that the only negative thing he could say about the improved visibility on his new Mopar was that for the first time he could look out the side window and see how exactly how tight a race it was while running 320 mph: “Against Wilkerson I looked over and I actually got to see how very close it really was. It’s really helped with everything including reaction time.”

Hale squared off in an all-Mopar semifinal against another Dodge underdog, No. 15 Blake Alexander, who drove his Charger past No. 2 qualifier Del Worsham in round one and Make-A-Wish Dodge Charger R/T DSR pilot Tommy Johnson Jr. in the quarterfinals. In the battle of No. 14 vs. No. 15, No. 14 triumphed, with Hale reaching the finish line first thanks to a 4.203/301.20, while Alexander slowed to a 7.443/93.94 after smoking the tires.

No. 6 qualifier and defending NHRA Funny Car champ Matt Hagan was perfect in 2015, up until the first round at Gainesville. A tick quicker off the starting line with a .063 reaction time to DeJoria’s .070, the Mopar Express Lane Dodge Charger R/T DSR driver smoked the tires not long after launch, slowing to a 5.312/241.54 as DeJoria motored for the win.

Although he bowed out in the quarterfinals, Jack Beckman will leave the Gatornationals on a more upbeat note than he did the first two 2015 events. Beckman used a 4.114/310.55 to defeat Chad Head (4.126/300.46), earning his first round win since October 2014. The DSR Infinite Hero Dodge Charger R/T driver’s weekend ended in round two against Wilkerson, his solid 4.096/308.50 falling short .

The same bug that bit No. 6 starter Allen Johnson in his final qualifying run on Saturday occurred again in eliminations, resulting in a premature to end to the “Magneti Marelli Offered by Mopar” Dodge Dart Pro Stock driver’s day. A bit slower off the starting line than first-round opponent Drew Skillman, Johnson was making up ground quickly with a .989 60-ft mark, his fastest 60-ft time of the weekend. Unfortunately, fuel problems again led to a misfire, causing Johnson to push in the clutch early, snuffing out the 2013 and 2014 Gatornationals champ’s hopes of a third consecutive event victory.

In the Sportsman ranks, Schriever, Louisiana, native Kevin Helms clinched the overall Stock Eliminator victory in his 426 Race HEMI Mopar Dodge Challenger Drag Pak. Helms qualified 12th with a 9.027 ET at 1.123 under index and defeated the ’14 Camaro of Paul Mercure, the ’15 Camaro of Daren Poole-Adam, Tommy Turner, Jimmy Hidalgo Jr. and Jimmy Hidalgo to set up a final round match against Jeff Adkinson. Helms took out the ’69 Camaro with a 8.923/149.50 to Adkinson’s 10.427/126.32.

Mopar-powered NHRA Pro and Sportsman racers will see action next at the NHRA Four-Wide Nationals, scheduled for March 27–29 at zMAX Dragway in Concord, North Carolina, near Charlotte. 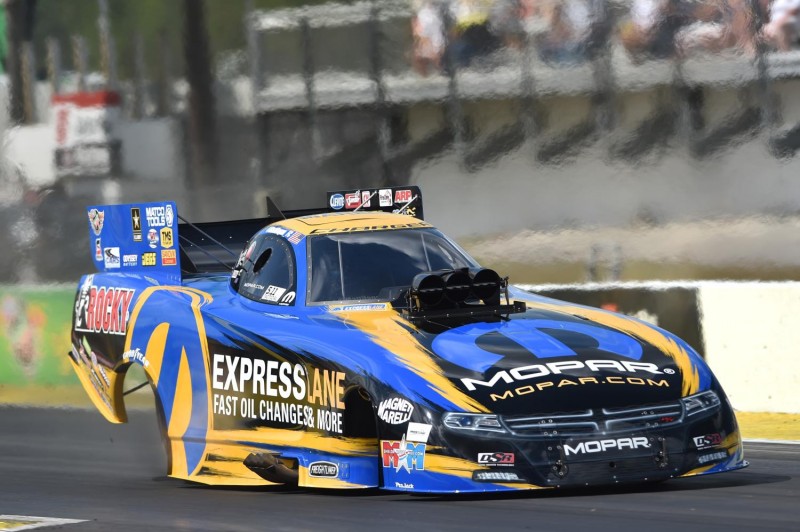