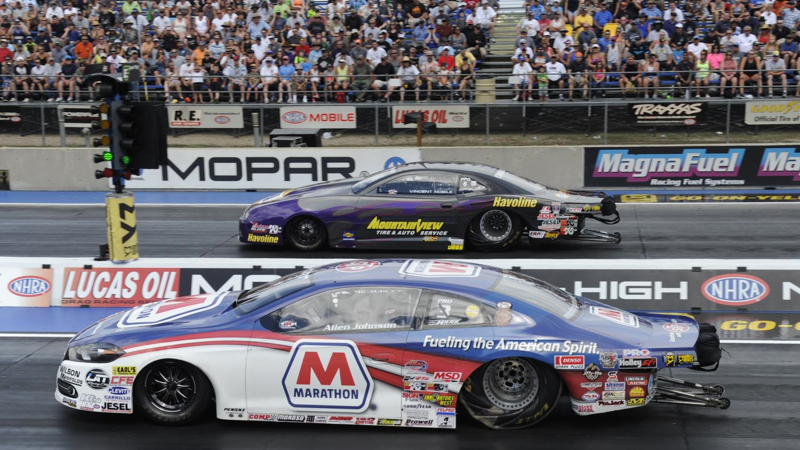 The 37th annual Mopar Mile-High NHRA Nationals saw a familiar face in the winner’s circle when Allen Johnson, driver of the HEMI-powered J&J Racing Marathon Petroleum Dodge Dart, earned the seventh Bandimere Speedway win of his career in his 10th consecutive final round on “The Mountain.” Johnson, whose last victory came at the season-closer in Pomona last year, pocketed the 27th Pro Stock Wally trophy of his career in front of packed stands and with thunderous applause from the ever-supportive spectators at the celebrated facility nestled in the Rocky Mountains.

“We are thrilled to have Allen Johnson take a Mopar Dodge Dart to the winner’s circle for a hard-fought first national title this season and to see him do this at the Mopar Mile-High Nationals for the seventh time,” said Pietro Gorlier, Head of Parts and Service (Mopar), FCA – Global. “The never-give-up attitude and hard work this team has put in to tune the HEMI and get the win truly represents what Mopar performance is all about.”

Johnson qualified in the No. 10 position and came into Sunday a little less confident than normal at a race where he has been a dominant force for many years. Confidence quickly began to surge, however, as the Johnson City, Tennessee-resident powered to a 7.000-second pass at 196.59 mph to end Drew Skillman’s quest for the title. Skillman was 7.047/197.74 at the top end. 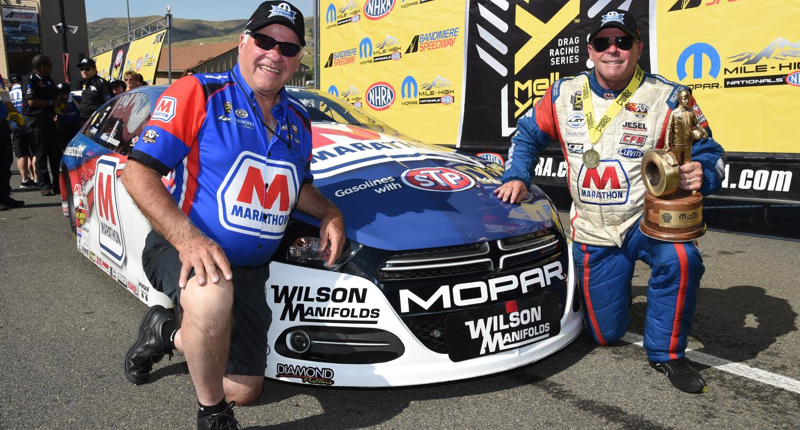 Next on the list was Greg Anderson, and Johnson wasn’t taking any chances. He left first by a generous margin of .050-second to get a solid lead and seal up the round win on a holeshot, 6.986/196.42 to 6.968/197.19. With the semifinals win light came a ticket to the final round – his second of the season after a runner-up to Anderson in Epping last month. In the other lane for the Denver final round was No. 9 seed Vincent Nobile, his former teammate. The final marked the first time since the U.S. Nationals in 2008 in which two Pro Stock cars from the bottom half of the field made their way to the closing round.

Johnson’s victory is the first of the season for a Pro Stock driver outside of the dominating KB Racing duo of Jason Line and Greg Anderson. Johnson had a chance of meeting Line in the final, but the points leader took himself out of the equation in the semifinals with a red-light start against Nobile.

“It feels good,” said Johnson, of breaking the KB Racing win streak. “I’m sure I’m speaking for everybody else in the pits; to break that juggernaut is big. Jason shot himself in the foot right there in the semis, or he may have been something to deal with there in the finals. Like I said, we might have got a break or two along the way. That’s that Mountain magic. Our streak [at the Mopar Mile-High Nationals], breaking the KB streak – it’s good for the class, good for the fans, good for TV, and good for NHRA.”

Johnson has held steady in the No. 4 position in the Pro Stock points since the Topeka race earlier this year, and he inched closer to No. 3 man Bo Butner with the win. He is now 70 marks out of third with four races to go before the Countdown to the Championship – NHRA’s six-race playoffs – field is set.