DragonFire is diving into season #5 of the popular Destination Polaris TV show, with its episode set to air in a couple of weeks. Since the show is now airing on Fox Sports Net, virtually every area of the country can now “Feel The Heat” when the Project X4 rig is unveiled on June 22nd. 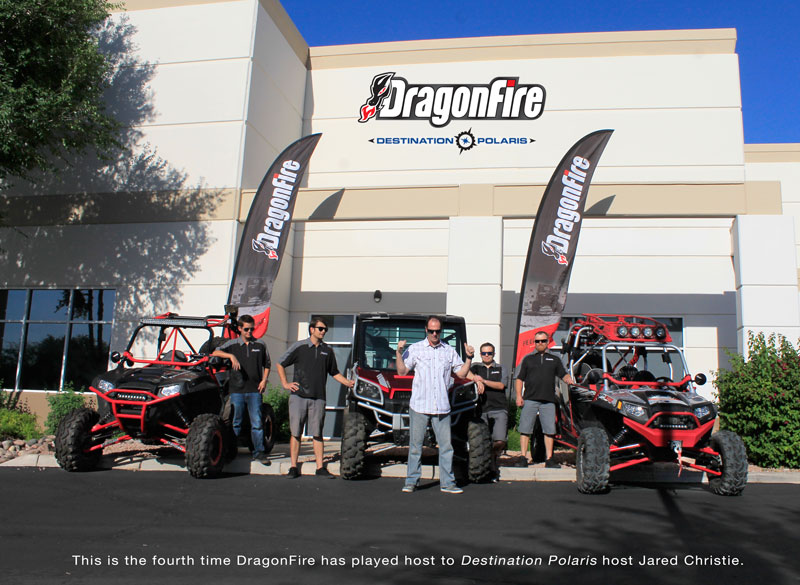 “It is quite an honor to be the only builder selected to construct a ‘Project X’ vehicle for four consecutive seasons,” says DragonFire’s social media manager Chris Moore. “Three years ago, we built a race-ready RZR XP 900 to introduce our RacePace line module components. Then we took an XP 4 and tricked it out with our trail capable RockSolid range of adventure touring accessories. Last year our ReadyForce Ranger accessory line was highlighted… so now what do we do for an encore?”

Actually the three previous builds are pretty tough acts to follow. The decision on what to do came down to a coin toss between two uniquely different concepts.

DragonFire’s Project X4 will be revealed on the Destination Polaris TV show on June 22nd. Now shown on Fox Sports, the show reaches more than 80 million homes each Sunday at 11:30 a.m. and re-airs on Thursdays at 3:30 p.m. (all times local). “The show did really well last season,” says host Jared Christie. “We’ve added over 10 million more homes on Fox than last year. The show and the audience continues to grow.”

More details about Destination Polaris can be found at the www.destinationpolaris.com and www.dragonfireracing.com.