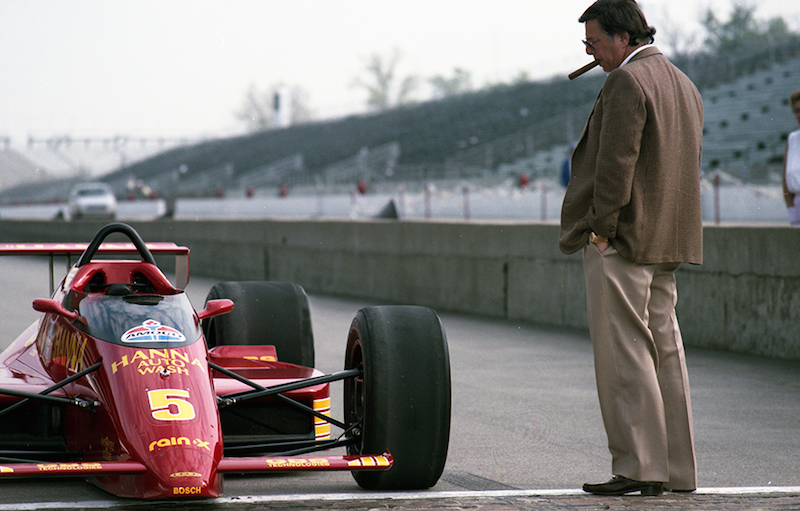 Perhaps best-known for his ownership stake in Newman-Haas Racing with actor Paul Newman – creating one of the most successful racing teams from CART, Champ Car and the unified IndyCar era – Carl Haas made an indelible mark on the American racing scene for more than five decades. He was a successful amatuer racer in SCCA and later became the distributor for Lola Racing Cars in the U.S. Some of Haas’ former drivers Mario Andretti, Michael Andretti, Sebastien Bourdais and Graham Rahal have commented on his passing last week.

“Carl had a heart of gold and a deep commitment to our sport. He earned the respect and admiration of his competitors and all those who drove for him through the years for being tenacious yet fair. In fielding teams in various series from SCCA to Formula One, Carl always sought the best equipment, the best drivers and the best team personnel. His legacy especially in Indy cars will be his phenomenal record of victories and championships, thanks in part to the great supporting cast I just mentioned. When I recall the joys of my whole career, I have to include my tenure at Newman/Haas because of the people. Spending 12 seasons with Carl and (wife) Berni and Paul Newman was amazing, triumphant, relentless work and heartwarming. All of it. The sport has lost a colorful character, but Carl Haas is unforgettable. He will always be an icon in motorsports and myself and so many others have lost a dear friend.”

“I am deeply saddened to learn of the passing of Carl Haas. Carl was an icon to our sport and the automotive industry, and I owe a great deal of my career’s success to my time with Carl and the Newman/Haas family. Paul and Carl built what was undoubtedly one of the greatest teams in history; I am truly honored to have been a part of the legacy they built.”

“It is with great sadness that I heard the news of Carl’s passing. Back in 2002, Carl gave me the opportunity of a lifetime when he hired me to drive the second Newman/Haas Racing in CART for the 2003 season. He did so with no sponsor to run the car, and I will be forever grateful for the faith he placed in me. From 2003 to the end of 2007, the whole team became a real family to me, thanks to him, Berni and Paul, who had successfully assembled the best group of guys I ever worked with. Today, I can only feel privileged to have been able to contribute with poles, wins and championships to Carl’s racing legacy. My deepest condolences to Berni and their family. Carl, you will be dearly missed.”

“Carl Haas was one of the legends of our sport, a person whose passion for racing led his teams and businesses to amazing success over the years. I personally can’t thank Carl enough for giving me my first opportunity and introducing me to the sport I love. In his time, Carl was the boss of many of racing’s greatest drivers, and for me to get to work under him for those four years was some of the greatest times of my life. There weren’t many like Carl, and he will surely be missed.”