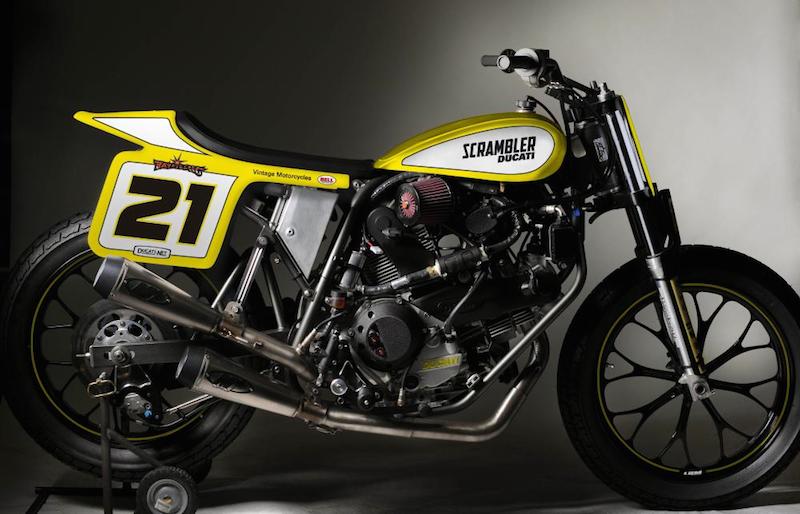 Shortly after Troy Bayliss officially announced that he was going to run the AMA Pro Flat Track 2015 championship, the first picture of the Ducati on which the three-times World Superbike Champion will be returning to the track has been released.

The bike is built around a Ducati twin-cylinder twin-valve air-cooled motorcycle and is specifically set up for oval track racing, being exactly what inspired the sportiest Ducati Scrambler, the Full Throttle. Like the bike that’ll be ridden by Bayliss, the Ducati Scrambler Full Throttle features low-slung wide bars, dual tailpipes on the right-hand side and race number holders, which on Troy’s bike will be displaying the Aussie’s trademark No. 21.

Made by the Lloyd Brothers Motorsports team,  Bayliss’ bike boasts a hand-made frame specially built for Flat Track races, a special oval race track suspension set-up, 19-inch wheels and, as per regulations, just one disc brake at the rear.

Flat Track races were first organised at the start of the 20th century in the U.S., and although their popularity peaked in the 1920s they still draw big crowds in America and Australia. The speeds reached by the riders on the 1-mile dirt oval tracks make the competitions truly spectacular.

That’s why Troy Bayliss has chosen to compete in the five races of the U.S. Grand National Series. His opening race is scheduled for  May 24 at the legendary Springfield oval in Illinois, where Troy will pair up with teammate Johnny Lewis.

“Dirt and flat track racing are where I cut my teeth as a junior. Everything I’ve learned on the dirt helped me through my career in track racing and to find myself back where it all started makes me feel young again”, said Bayliss. “I’m really pleased to have this opportunity. I want to have fun; racing in the American Grand National Series will be one heck of a challenge, but I just couldn’t pass up the chance to race on a Ducati with Lloyd Brothers Racing, especially as it means flying the Ducati Scrambler colours. Flat Track racing is on the up and up here in Australia. We’ve run the Troy Bayliss Classic for three years now and mixing it up with Flat Track specialists Henry Wiles, Jared Mees and Sammy Halbert has been great. I’m really looking forward to my time in the US of A and I’m very grateful to Ducati, my Ducati Scrambler brand friends, Ducati North America, Lloyd Brothers Motorsport and Jim Dillard for this awesome opportunity.”

Troy Bayliss is one of the most successful road racers ever. He has notched up an incredible 52 wins in the World Superbike Championship, an unforgettable victory in the Valencia MotoGP in 2006, a pole position in the Daytona 200 in 2000 and a British National Superbike Championship title in 1999, every single success being achieved on a Ducati.

Flat Track races are nothing new to Bayliss. In 2013 in Australia he established the Troy Bayliss Classic, an oval track competition in which participation is by invitation only; since then, in his native Australia, he’s gone up against a host of riders from the AMA Pro Flat Track championship. In 2014 he also won the national Flat Track and Supermoto championships in Australia. Moreover, Troy recently took part in the first two rounds of the SBK 2015 World Championship, replacing an injured Davide Giuliano on the Panigale R of the Aruba.it Racing – Ducati Superbike Team.