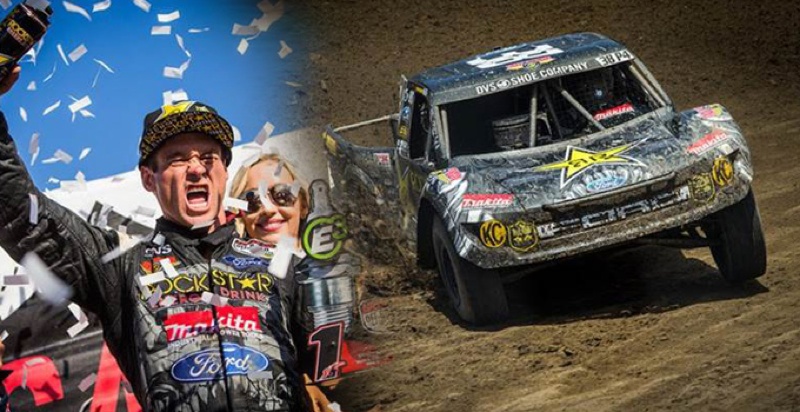 “It’s a dream come true to win our first off road truck race with this new engine program,” said Andy Durham, “To be able to build winning engines in late models and off road trucks is amazing. I’m very happy with our program and with the RY45 platform. I’m looking forward to seeing what the rest of this year will bring us.”

The Pro 2 Unlimited class was the last race of the night at Lake Elsinore with Deegan in his No. 38 Rockstar Energy, Ford Truck starting fourth. Before long, he was up to second place and charging forward by lap 3. On lap 8 Deegan made his move by powering through the step-up jump into turn 2 and diving to the inside of RJ Anderson for the lead.

A lap 12 caution for debris and another caution on lap 16 for a stalled truck put Anderson on the rear bumper of Deegan for both restarts. Deegan was up for the challenge and would motor to his first victory of 2015 in the LOORRS.

Overall, Deegan raced his way to three top five finishes in four races at Lake Elsinore this past weekend in his Pro 2 and Pro 4 trucks powered by Durham Racing Engines. It was his best weekend so far in 2015 and adds momentum heading to Miller Motorsports Park near Salt Lake City, Utah on June 20th & 21st for rounds 7 & 8.

Deegan has won three LOORRS Pro 2 Unlimited Championships in the last four years with 2014 being Durham Racing Engines first Championship with the team. The defending champion is hitting his stride at the right time with 5 remaining events left on the schedule.