Ernie Francis, Jr. had already secured the TA championship by the time he arrived in Daytona for the 13th and final race of the 2017 Trans Am racing season. He left the track on Saturday with his 10th victory and, at 19 years old, became the youngest Trans Am driver to win four consecutive championships. 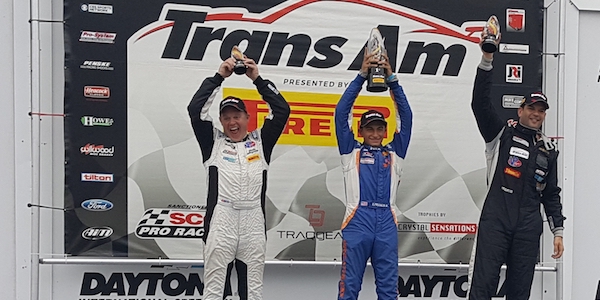 Francis Jr. drove the Katech-powered, FramelessShowerDoors.com-sponsored Breathless Racing Team Ford TA in Daytona. The 29-lap, 103.2-mile chase around the famous Daytona International Speedway road course was the site of the final race of the season.

“It was amazing to walk into Daytona knowing that I had already won the championship. Leaving Daytona with yet another win was incredible, and I am really proud of the team for all of the hard work this season,” Francis, Jr. said.

With 33 wins and four consecutive Trans Am championships, Francis, Jr.’s mark on the Trans Am series is unforgettable. The 19-year-old has worked hard to earn his place on the winner’s podium, and Katech, Inc. has played a huge role in Francis, Jr.’s success as his team’s engine builder.

“In 2014 and 2015, we won the championships together with Ernie, Jr. in the Camaro and last year we won in the Mustang. At Mid-Ohio last year, Ernie, Sr. told me the team would be moving to TA racing in 2017, and we knew we would want to work with them on their TA engines. We’re really proud our partnership has led to friendships as well as another championship,” said Katech Director of Motorsports Kevin Pranger.