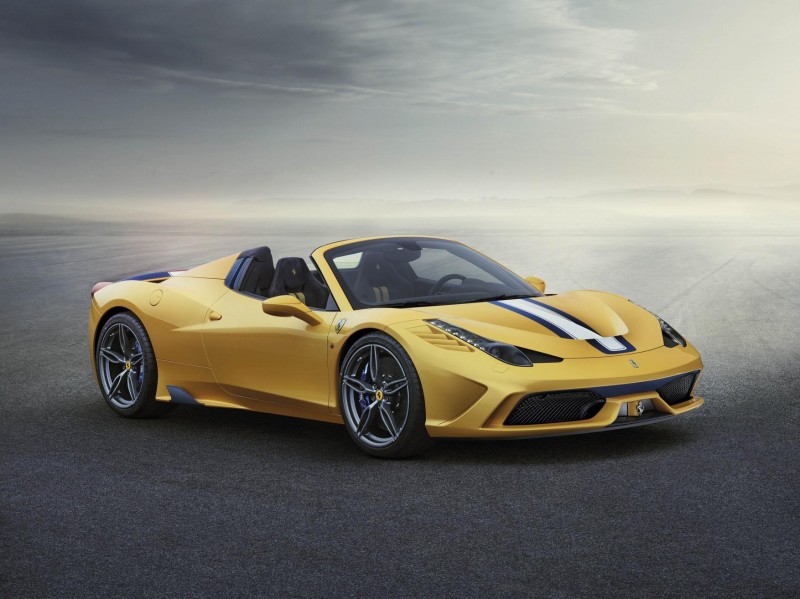 The 458 Speciale A (A as in Aperta) new limited edition special series is a celebration of the dazzling success of the various versions of the 458, a model that has collected an array of international motoring media awards and track victories, not least a double WEC title and category wins in classic endurance races, such as the 24 Hours of Le Mans, the 24 Hours of Daytona and the 12 Hours of Sebring.

Dedicated to just 499 Ferrari collectors, the 458 Speciale A is the most powerful spider in Prancing Horse history, effortlessly marrying extreme performance with the sublime pleasure of drop-top driving. Its aluminium retractable hard top, which takes a mere 14 seconds to deploy or retract, helps reduce the weight difference with the Speciale coupé to just 50 kg.

The 458 Speciale A sports the most powerful naturally-aspirated road-going V8 engine ever built by Ferrari. It punches out a massive 605 cv (135 cv/l specific power output) and 540 Nm of torque at 6000 rpm yet only generates 275 g/km of CO2 emissions. The three international Best Performance Engine awards the V8 has won are acknowledged on a special plaque in the cockpit.

The new car sprints from 0-100 km/h in just 3.0 seconds and has a Fiorano lap time of 1’23”5. These superb results are thanks in great part to its front and rear active aerodynamics, the rigidity of a chassis that incorporates 10 aluminium alloys, and Side Slip Angle Control (SSC) which guarantees unparalleled sporty driving in all conditions, underscored by the seductively exhilarating signature Ferrari soundtrack.

As is the case with all Prancing Horse cars, the 458 Speciale A’s sculpted forms are absolutely performance-oriented. In fact, a series of innovative and original bodywork solutions has made the 458 Speciale A the most aerodynamically efficient Ferrari spider ever.

Punching out 605 cv at 9000 rpm, the  458 Speciale A’s engine is the most powerful naturally aspirated V8 ever built in Maranello and also sets a new specific power record (135 cv/l) for a road-going power unit of this type. These two figures alone speak volumes about the extraordinary prowess of this 4497 cc mid-rear engine. The work carried out on the car as a whole has also delivered an exceptional weight-to-power ratio of 2.21 kg/cv which results in such unparalleled performance levels as 0 to 100 km/h acceleration in 3” (0 to 200 km/h in 9”5) and a Fiorano best lap time of just 1’23”5.

To achieve these results, the 458 Speciale A’s combustion, mechanical and volumetric efficiency were all significantly improved with a focus on reaching ambitious targets such as boosting torque at all revs through upping the compression ratio to 14:1, the highest for an engine of this kind.

Clearly, the transfer of Ferrari’s Formula 1 expertise and technology was fundamental too. This is true not merely of the design phase but also the production and control processes involved: the engine is the product of the cutting-edge in-house foundry which also casts leading-edge components with extreme structural and dimensional characteristics, exactly as happens with the Scuderia’s single-seaters.

Improved combustion chamber fluid-dynamics, new intake geometries and a new cam profile are just some of the modifications that helped the engineers meet their goals. Several components were also reviewed (new materials were adopted for the pistons and con rod bushings) and this too made a significant contribution. Lastly, the crankshaft and intakes systems were also redesigned, with the latter slashing 8 kg off the engine’s overall weight.

The soundtrack, both inside and outside the car, is full-bodied and uncompromising too, thanks to the position of the tailpipes, the configuration of the silencers and the redesign of the inlet tract.

Record-breaking innovations were made to the 458 Speciale A’s electronics, brakes, suspensions and tyres also. Not only have they cut the car’s time over single laps, but also the repeatability of that performance on subsequent ones without demanding professional driving skills. The result is exceptional levels of pleasure behind the wheel.

A blisteringly fast response time to inputs from the steering (0.060 seconds) and lateral acceleration of 1.33 g are also the highest figures of their kind ever achieved on a road-going Ferrari aimed at our most demanding performance-oriented clients too.

In terms of electronic control systems, the big news is the world premiere of Side Slip Angle Control (SSC) and improved F1 transmission gear-shift control.

Thanks to sophisticated algorithm, SSC carries out instantaneous analysis of the car’s side slip angle, comparing it with reference data, optimising engine torque and more efficiently distributing differential torque between the two driven wheels. With the Manettino set at RACE or CT OFF, the 458 Speciale A makes the most of available grip resulting in greater ease and more consistent control on the limit.

The dual-clutch transmission enhances the sporty feel of the 458 Speciale A still further also. A reduction in response times means  40 per cent faster longitudinal acceleration with engine revs adapting 20 per cent more rapidly as the car shifts up through the gears while, when downshifting, the transient time required for engine revs to match the gear ratio is 44 per cent faster.

Every single component of the Brembo braking system has evolved and the solutions adopted for the LaFerrari have been adapted to suit it. Extreme Design calipers, HT2 discs with a high percentage of silicon and smaller front pads made from HY hybrid material are all new additions that add up to an 8 per cent reduction in stopping distances compared to the 458 Spider as well as more consistent performance under severe use.

The 458 Speciale A’s Michelin Pilot Sport Cup2 were designed specifically for the model. They guarantee a 6 per cent increase in grip and are made from a compound that boosts performance over a single lap in the dry, improves performance consistency over multiple laps and guarantees better grip in the wet. The forged 20” wheels are a new design and are over 12 kg lighter than the 458 Spider’s.