The rigors of racing for 24 consecutive hours were evident Sunday, with a Rolex 24 at Daytona that was remarkable for its speed but also memorable for its attrition that dashed championship hopes for a number of high-profile teams.

In winning the 56th running of the famed sports car endurance classic at Daytona International Speedway, Christian Fittipaldi, Joao Barbosa and Filipe Albuquerque, in the No. 5 Mustang Sampling Cadillac DPi, completed 808 laps and a total of 2,876.48 miles – both race records and the equivalent of a Daytona Beach-to-Oakland, California cross-country drive. Record-setting was aided by the race having only three caution periods. 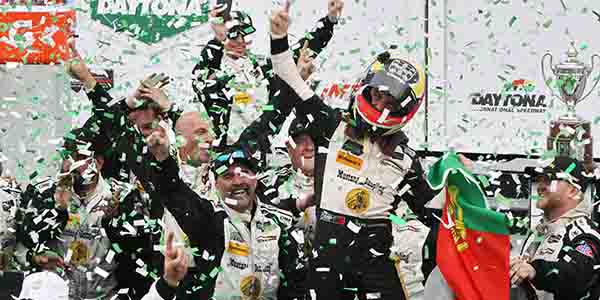 The Cadillac was stout and steady despite some late-race overheating problems, which added up to dominance, ultimately. The No. 5 led the race’s last nine hours and at the finish was 1 minute, 10.544 seconds ahead of the other Action Express Racing entry, the No. 31 Whelen Engineering Cadillac DPi driven by Felipe Nasr, Eric Curran, Mike Conway and Stuart Middleton. Finishing third as the final car on the lead lap were Colin Braun, Loic Duval, Jonathan Bennett and Romain Dumas in the CORE Autosport No. 54 ORECA LMP2.

The demanding 3.56-mile DIS road course was especially unforgiving for the IMSA WeatherTech SportsCar Championship’s headlining Prototype class. The defending Rolex 24 champion team, the No. 10 Konica Minolta Cadillac DPi, fell out of contention early due to a faulty radiator and ended up 45th in the 50-car field. The No. 23 Ligier LMP2 of United Autosports, featuring two-time Formula 1 champion Fernando Alonso, punctured a tire in the eighth hour and had a brake issue in the 11th hour; the car finished 38th. The two Acura DPi entries fielded by owner Roger Penske – with former Indianapolis 500 champions Helio Castroneves and Juan Pablo Montoya in the driver lineup – finished ninth and 10th, respectively. An on-track incident damaged one car; an alternator problem hampered the other’s chances.

All of that combined to open the door more than enough for the No. 5 team, which finished second in last year’s Rolex 24 after a late-race incident with the No. 10 Cadillac.

“I really do believe that the fact we had very few yellows compromised a lot of the machinery out there and really put a lot of stress on a lot of cars,” said Fittipaldi, after he and Barbosa claimed their third Rolex 24 victory.

The GT Daytona class was won by Rolf Ineichen, Mirko Bortolotti, Franck Perera and Rik Breukers in the No. 11 Lamborghini Huracan GT3. It was the first Rolex 24 victory for Lamborghini.

Five-time Rolex 24 champion Scott Pruett, racing for the final time, co-drove the No. 15 Lexus RC F GT3 to a ninth-place finish (29th overall) in the GTD class. Pruett retires with a share of the Rolex 24 all-time overall victory record, tied with Hurley Haywood. Pruett holds the race record for class victories with 10.