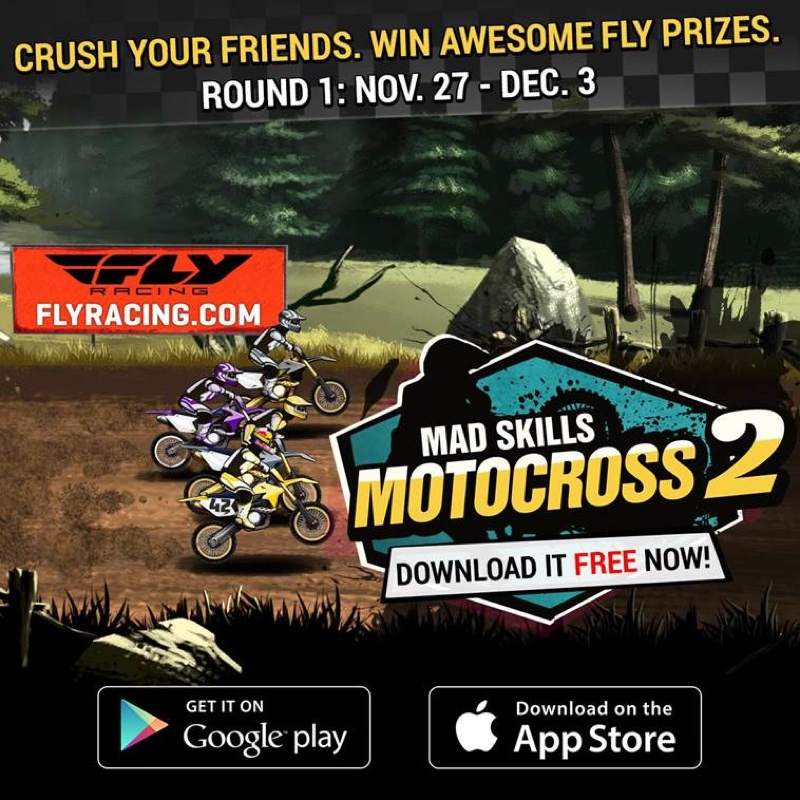 FLY Racing and Mad Skills Motocross 2 (iOS/Android) have joined forces to bring you the first-ever FLY Racing MX World Series. The gate drops on this three-round, three-week event this Thursday, November 27, and runs through Wednesday, December 17.

Fight for your line against friends, neighbors and players from around the world in this three-round series of challenging and exciting tracks. Brag about your results on Facebook and Twitter, and climb onto the podium and win some awesome FLY Racing prizes.

Prizes include a grand-prize package of a full set of FLY Racings high-end Evolution racewear, an F2 carbon helmet (what the FLY pros wear), and an autographed jersey from both Trey Canard and Andrew Short. Plus a bunch more FLY Racing stuff!

Downloading the game is FREE, and so is participating in the FLY Racing MX World Series. It can be downloaded at www.madskillsmx.com/get-it

This is the first-ever Mad Skills Motocross 2 Jam Event. There will be others in the future.

More than a quarter million players are expected to participate in the event, including dozens of professional athletes.

For those playing, feel free to use the hashtag #flymxworldseries. The more racers, the better, so tell your friends to join in the fun.