The Ford GT goes P1-2 at Watkins Glen and takes the third leg of the IMSA Tequila Patron North American Endurance Cup. The duo of Richard Westbrook and Ryan Briscoe put the No. 67 on top of the podium. Roush Yates Engines working in partnership with Ford Performance powered the Ford Chip Ganassi Racing team to their third win of the season at Sahlen’s Six Hours of the Glen at Watkins Glen International circuit.

“This has been a remarkable weekend,” said Doug Yates, President and CEO of Roush Yates Engines. “I am so proud of the Roush Yates Engines and Ford Performance teams. To take home the NASCAR wins at Daytona International Speedway and now the second IMSA race win on the heels of winning Le Mans is a very humbling moment for our team. I cannot say enough about the Roush Yates Engines’ team, their hard work and dedication producing these race winning engines.”

The twin-turbo Ford EcoBoost V6 race engine performed flawlessly during the six hour endurance race, otherwise known as a six hour sprint. The No. 67 car driven by Westbrook captured the pole with laying down a blistering track record of 1:41.301 on Friday. The sister car of Joey Hand and Dirk Müller, drivers of the No. 66 were positioned fourth on the starting grid.

The six hour race was a test for both mechanicals and drivers, requiring changing strategies as the race unfolded. Trackside, the Roush Yates Engines’ Calibration Engineers worked closely with Ford Chip Ganassi Racing and Ford Performance to develop and execute the race winning strategy. 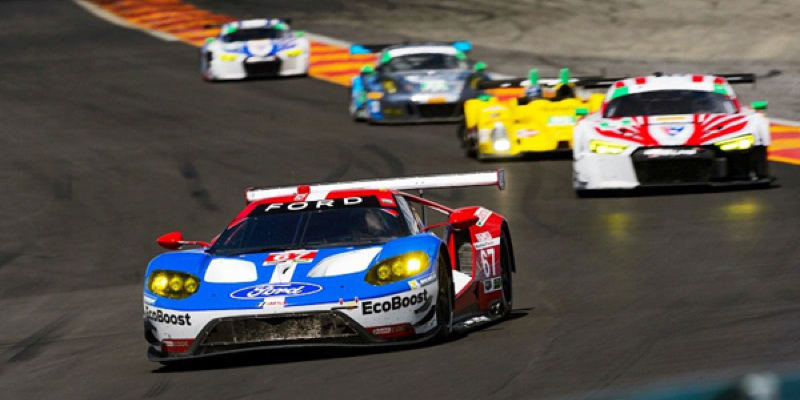 “Clearly we have a little roll going here,” stated Joey Hand. “(Briscoe and Westbrook) won at Laguna Seca, we both had fast cars there, then we went to the Le Mans 24 Hours and had a great run there and ended up first and third between these two cars. This Ford Chip Ganassi Racing team, we’re hitting our stride. We got along really well from the beginning, but I think with the whole team, everyone is just flowing really good. There’s just a lot of good mojo.”

Ford Chip Ganassi Racing and Roush Yates Engines team has great momentum going into this weekend’s race, as Ford Performance announced they were extending the Ford GT race program for another three years (into 2019). The team has found their stride, winning two in a row IMSA WeatherTech SportsCar Championship GTLM class races and winning Le Mans gives them great motivation for the sixth race of the season in Ontario.