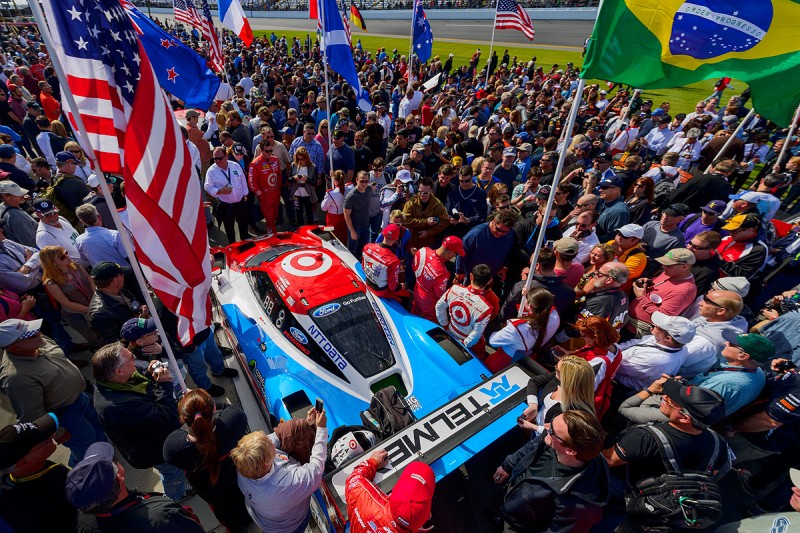 Ford EcoBoost technology propelled Chip Ganassi Racing with Felix Sabates (CGR) and Michael Shank Racing with Curb/Agajanian (MSR) to three wins and seven podiums in TUDOR United SportsCar Championship competition in 2014, including victories at the grueling 12 Hours of Sebring, Long Beach and Circuit of The Americas.

The Roush Yates-prepped 3.5-liter Ford EcoBoost twin-turbo V6 logged over 15,000 endurance-racing miles in 2014 at 11 of the most demanding road racing tracks in North America, in all weather conditions and in races as long as 24 hours. Every mile provided an opportunity for development; every track provided a proving ground unlike any other.

“Last year we won the championship with winning two races,” said Ganassi pilot and Sebring winner Scott Pruett. “We won three races this year. So things look good for 2015. It’s been a real up-and-down season, but these are the years that really bring you together as a team and a group.”

“It’s a testament to the robustness of the technology that powers many of our production vehicles around the world, that our engines stood up to some of the toughest tests in North American endurance racing,” said Jamie Allison, director of Ford Racing.

The first win came at only the second outing for the new race engine, at the historic Mobil 1 12 Hours of Sebring in March. The Roush Yates-prepped twin-turbo 3.5-liter EcoBoost V6 powered CGR to victory lane with drivers Scott Pruett, Memo Rojas and Marino Franchitti.

It was Franchitti who piloted the 01 Telcel Ford EcoBoost Riley across the finish line first to earn victory in his team’s first-ever appearance at the legendary endurance race, and it was the first overall victory for Ford at Sebring since 1969.

The win was the culmination of intense preparation by the team, Ford Racing, Ford Motor Company and Roush Yates engineers, who worked together in 2014 to prove that the heart of a production engine can stand up to the most intense rigors and demands of North America’s toughest tracks.

CGR went on to win at Long Beach and the Circuit of the Americas in Texas with Pruett and Rojas, who also finished third at Laguna Seca. Pruett and Sage Karam, who pinch-hit for a temporarily sidelined Rojas, finished second at Indianapolis, while Pruett and Rojas teamed up with Scott Dixon for a third place at Petit Le Mans. MSR regulars Ozz Negri Jr. and John Pew made their own appearance on the podium with a second place at Road America.

Before the 2014 season began – the first year for the unified TUDOR United SportsCar Championship – MSR teamed with Ford Racing and its 3.5-liter EcoBoost to break a series of closed-course speed records at Daytona International Speedway that had stood since 1987, setting a new record average lap speed of 222.971 mph around the high-banked oval.