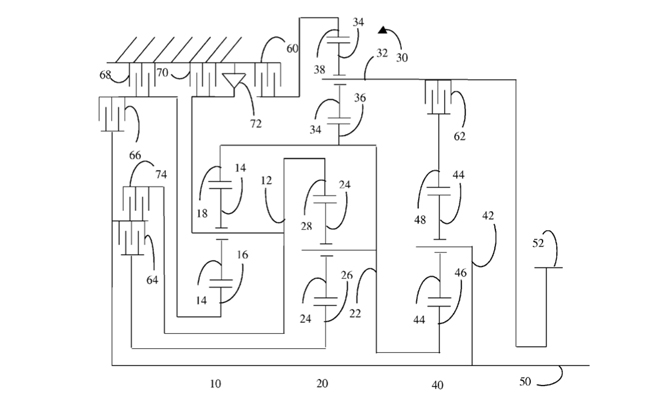 It’s no secret that automatic transmissions have been growing to entail more and more gears over the last decade or so in a quest for greater efficiency. With eight and nine-speed transmissions being employed on several vehicles today, the so called “Transmission Wars” have already ramped up.

VW is known for employing its ten-speed DSG transmissions across its model range, and we have word that Ford is bringing a new ten-speed automatic to the Raptor; this unit has been co-developed with GM and will likely appear in many of Detroit’s vehicles. However, what we haven’t yet seen is an eleven-speed automatic- until last week.

AutoGuide unearthed an April 9, 2015 filing with the US Patent and Trademark Office that laid out the plans for an 11-speed automatic gearbox(seen above.) While this doesn’t mean anything definitive, the fact that the option is being broached in some seriousness is of interest.

After the filing was unearthed, a variety of industry representatives began reaching out to Ford for comment. Ford power-train spokesman Paul Seredynski finally gave in and commented, saying,

“As a technology leader, we submit patents on innovative ideas as a normal course of business. Patent submissions help protect our new ideas but do not necessarily indicate future business or product plans,”

So, while the design is far from pre-ordained, it may give us a snapshot of what the future of automatic transmissions will look like. Companies file patents like this all the time, and the eleven-speed automatic may or may not ever make it to production.

Of course, this raises the question of whether or not more gears are really better. Naturally, with more gear ratios comes greater efficiency, but is the added cost really worth it? Many are saying no. Industry leader in transmission technology ZF has made no secret of the fact that their development is stopping at nine-speeds. ZF CEO Stefan Sommer was quoted earlier this year as saying,

“There is no hard line, but you have to consider the law of diminishing returns. The question is whether adding even more gears makes sense.”

Sommer quoted nine speeds as “the natural limit,” also opining that ZF’s best nine-speed gearboxes were only 11 percent off from the ideal theoretical fuel efficiency.

And of course, there are also those of you out there who will argue in favor of the Continuously Variable Transmission(CVT) as one day rendering the automatic transmission obsolete. The CVT still has to overcome its maintenance and reliability hassles and gain the ability to handle larger power loads, but perhaps in due time its popularity will grow over the automatic.

The patent filing for Ford’s 11-speed automatic can be viewed here.