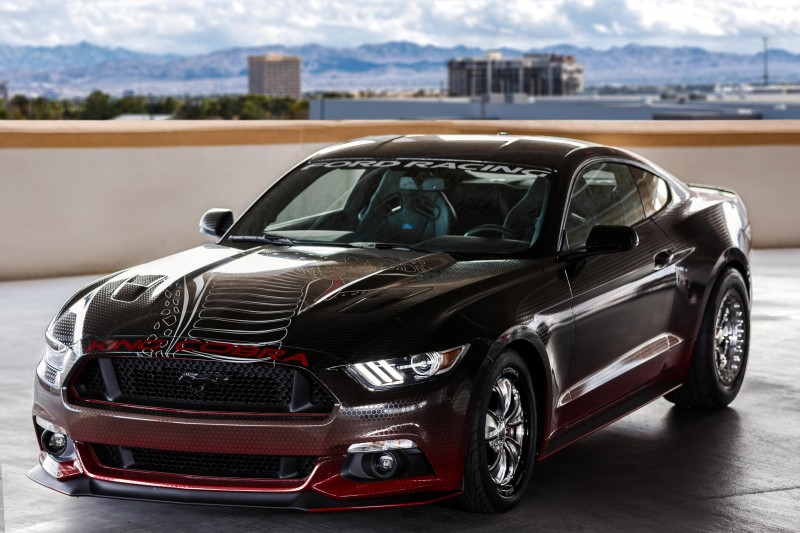 Ford Racing is excited to introduce a special 2015 Mustang GT built exclusively with Ford Racing performance parts.  Named the “King Cobra,” there is no question this custom machine has some serious bite.

Built to be a high-performance street-and-drag strip car, the King Cobra can be replicated by any Mustang owner with the help of Ford Racing’s extensive parts catalog.

“At Ford Racing, we like to push cars to their absolute limit,” said Jamie Allison, director, Ford Racing.  “This is something we have been doing for 113 years and why we were so excited to get our hands on the all-new, 2015 Mustang.

“We wanted Mustang enthusiasts to be able to open up the Ford Racing parts catalog and get one of everything and see what they could get.  We think the King Cobra package is it.  But none of this great work would be possible if Team Mustang had not built the best production Mustang yet.”

This one-off concept is a showcase for Ford Racing’s first performance packages available for the 2015 Mustang. It is equipped with Ford Racing’s “Drag Pack,” “Handling Pack,” and “Super Pack” supercharger kit that helps the King Cobra produce 600+ horsepower.

The Drag Pack includes heavy-duty half shafts, and a rear sub-frame kit with pre-installed high-performance bushings to improve traction and put optimum power to the ground under hard acceleration.

The Handling Pack lowers the car approximately one inch with front and rear lowering springs – the front springs on pre-assembled struts. The Handling Pack also includes rear shocks and a stabilizer bar kit.

Ford Racing recently took an early version of King Cobra package on a 2015 Mustang to Michigan’s Milan Dragway, where the car proved its performance capabilities with a stunning quarter-mile elapsed time of 10.97 seconds.

Ford Racing chose the name King Cobra for this parts package because of its long association with high-performance Ford vehicles. The King Cobra moniker was first introduced by Carroll Shelby in 1963 for the high-performance Cooper Monaco sports racing cars he built with mid-mounted, 289-cubic-inch Ford V8 engines.

Ford used the name again in 1970 for an aerodynamic prototype NASCAR stock car, based on the Ford Torino which never raced. The most well-known King Cobra was an option package that could be equipped to a 1978 Mustang II.   This model was the first Mustang to sport the “5.0” designation for the metric equivalent of the V8 engine’s 302 cubic-inch displacement.