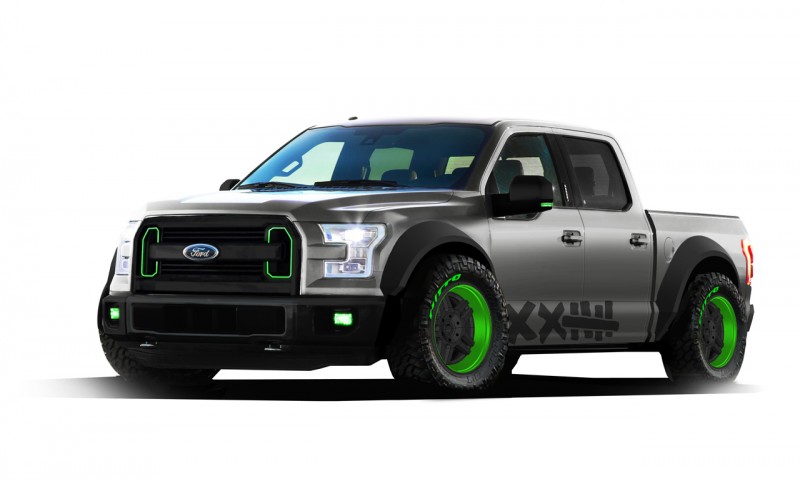 Ford is actually quite well represented in the drift car world, especially with the Fiesta and Focus gaining popularity in recent years, and a good number even competing in Formula Drift. However, there hasn’t really been much attention given to the F-150 in this scene, even though it’s ironically perhaps the vehicle Ford is most renowned for; though some may argue for the Mustang in this case.

However, with Ford’s most recent entry to SEMA, that will change. The truck pictured above is a 2015 Ford F-150 that has been customized by reputed driftmaster and Formula Drift super-star Vaughn Gittin Jr. The new truck employs an upgraded Kibbetech suspension and Air Lift Performance Air Ride, and the truck also boasts 12 inches of travel with a King shock controlled system.

Gitten expresses that the truck is built for a variety of environments. “I love trucks, and to build one that has daily on- and off-road capabilities, as well as drifting and jumping capabilities is something I have always wanted to do,” said Gittin. “I am really pumped to get crazy in this F-150 at SEMA this year.”

Ford is also displaying another F-150 that was designed by freestyle motocross rider Brian Deegan. This vehicle will feature the 3.5 liter EcoBoost engine and a host of other performance and off-road modifications.

Ford hopes that these two vehicles will have a shot at taking home the “Hottest Truck” Award at this year’s Specialty Equipment Market Association(SEMA) trade-show held in Las Vegas, Nevada during the first week of November.