Ford has announced that it plans to bring its 3.5L V6 EcoBoost racing engine to the 2014 TUDOR United SportsCar Championship series. The new V6 is part of Ford’s strategy to introduce production-relevant technology into racing.

The new engine will debut at the 2014 Rolex 24 at Daytona on Jan. 25-26 and run the entire season. Michael Shank Racing is on board as the first team to put EcoBoost power behind its DP car. A new-look Daytona Prototype car has been created with Ford corporate design influence.

“At Ford Racing, we really put great emphasis on racing production-based vehicles as well as production-based technologies,” says Jamie Allison, director, Ford Racing. “We’re proud to bring a direct-injected, twin-turbo 3.5L V6 EcoBoost engine to the United SportsCar Championship in a field of competitive V8-powered entries. We want to show Ford EcoBoost’s capabilities as an engine that provides both performance and fuel economy, on and off the track.”
“This engine is the future,” says Doug Yates, CEO, Roush Yates Racing Engines. “This Ford EcoBoost engine includes all the newest technologies – direct injection, turbocharging and high efficiency. We’re looking at taking it to the next level through this sports car racing program.” 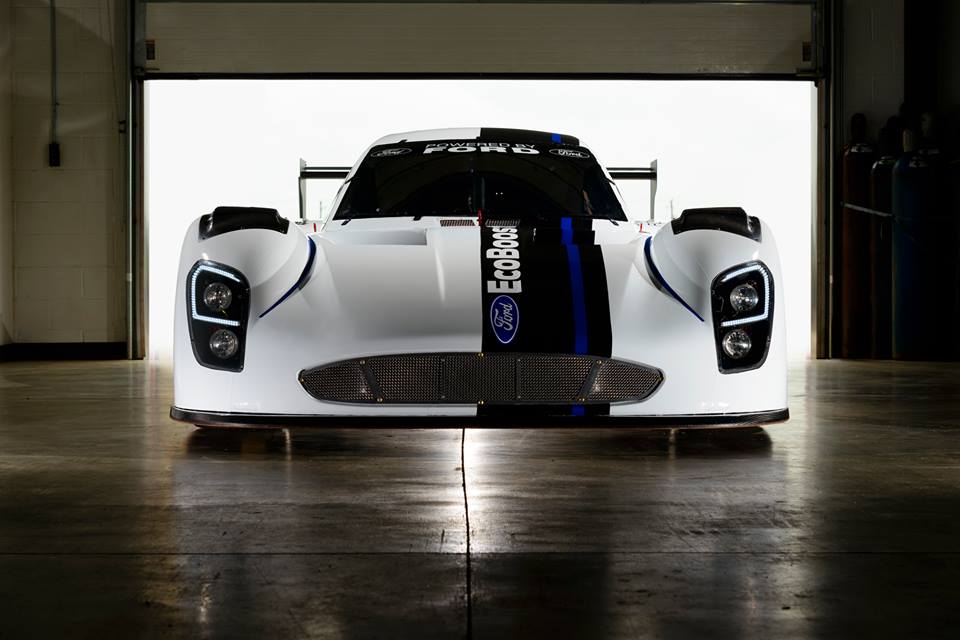 While the new engine will make its competitive racing debut at the highly anticipated 2014 Rolex 24 at Daytona, it will actually hit the Daytona track for the first time Oct. 9.
In a joint effort between Michael Shank Racing, Ford Racing and Continental Tire, the 2012 Rolex 24 at Daytona championship team will aim to set a new track record at the “World Center of Speed” by eclipsing the 210.364 mph lap laid down Feb. 9, 1987, by NASCAR champion Bill Elliott, who pushed his Ford Thunderbird to the top of the speed charts in qualifying for the Daytona 500.
“It’s really a privilege to have an opportunity to put your name in the record books like this,” says team owner Mike Shank. “It is almost inconceivable that this record has stood for such a long time, so it’s pretty special to be involved. We worked a long time to develop our relationship with Ford to be in a position to take on projects like this. Anytime you can get in the record books, it is a great opportunity and just builds on what this company has done.”
To prepare for the record run and upcoming season, the EcoBoost engine has recently undergone endurance testing at Ford’s Dynamometer Lab in Dearborn, Mich.