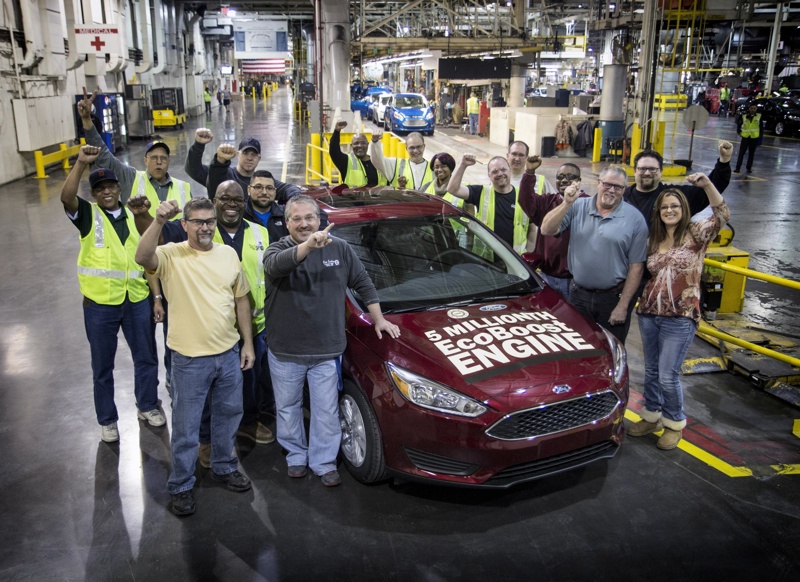 Ford has hit a new production milestone with its fuel-efficient EcoBoost engine technology. Late last week, the 5-millionth vehicle with a Ford EcoBoost engine rolled off the assembly line at Michigan Assembly Plant in Wayne, Michigan.

It was just less than three years ago that Ford celebrated production of its 500,000th EcoBoost-equipped vehicle. Now, a Ford Focus equipped with 1.0-liter turbocharged engine represents the 5-millionth Ford EcoBoost engine produced.

EcoBoost was launched in 2009 on Ford Taurus SHO with the 3.5-liter EcoBoost V6. That year, 14,439 EcoBoost engines were manufactured. In 2010, the first full year of EcoBoost production, 62,704 vehicles with the technology were built.  The 2-millionth EcoBoost engine rolled off the line at Louisville in October 2013.

Production of the 5-millionth EcoBoost-equipped vehicle coincides with the first full year in which customers can choose EcoBoost-equipped engines on 100 percent of Ford’s passenger vehicles sold in the United States. The fuel-saving technology is now available in every region the company serves.

This most recent production milestone constitutes another step forward in the One Ford plan to drive innovation across the company’s global product portfolio, and continues to deliver on Ford’s commitment in its Blueprint for Sustainability.

Other members of Ford’s global EcoBoost family include the 1.5-liter, 1.6-liter, 2.0-liter and 2.3-liter four-cylinder engines, and the powerful 2.7-liter and 3.5-liter V6 engines.