Ford Motor Company, underscoring its growing ambitions in the Middle East and Africa, has introduced the all-new Mustang on the Burj Khalifa, the world’s tallest building.

Ford Executive Chairman Bill Ford capped the live-action event by delivering the iconic pony badge to the 2015 yellow Mustang on the 112th floor of the skyscraper. The event was viewed live around the world on YouTube as well as by approximately 10,000 people gathered in the Dubai Downtown area, overlooking the Dubai Fountain and Burj Khalifa.

To see the event replayed, watch it here.

“Today we planted the Ford flag in the Middle East & Africa, an exciting, vibrant region that represents the final frontier for growth in the auto industry,” Bill Ford said. “We also sent a message to the world that Mustang is going global after 50 years as America’s greatest motoring icon.”

Viewers of the light-hearted action spectacle witnessed a dramatic journey that started with a hero atop a cliff in Arizona taking an urgent call. The unknown protagonist raced via horseback, airliner, car, helicopter and jet ski to Dubai to deliver the iconic pony badge. Only in the final scene on the 112th floor of the Burj Khalifa – 1,300 feet above the ground – was the protagonist revealed with a wink and a nod as Bill Ford, the great-grandson of Henry Ford. 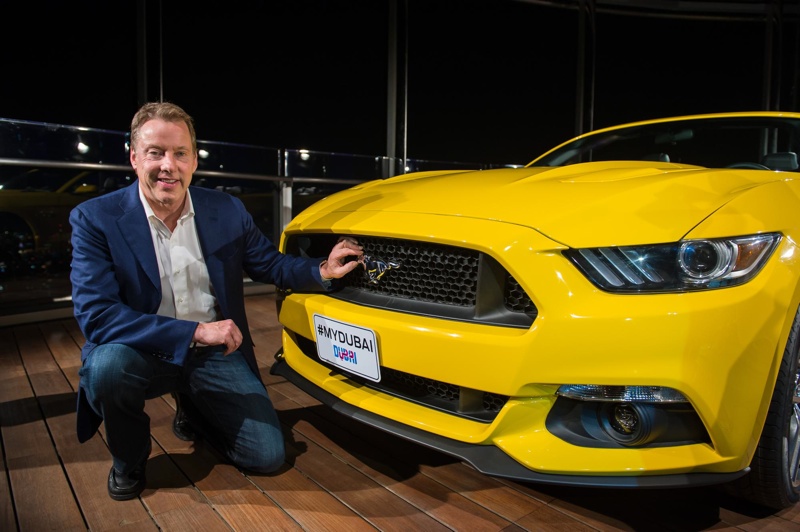 “A century ago Henry Ford had a vision to open the highways to all mankind,” said Jim Benintende, president, Ford Middle East and Africa. “Placing our regional headquarters in Dubai lets us tap the innovation and imagination that’s flourishing here, helping us to bring our founder’s vision to this part of the world.”

In addition to the new Mustang, Ford also previously announced a plan to introduce such new vehicles as Ford Focus, Ford Fusion and Lincoln MKC in the Middle East and Africa. The company also announced the accelerated rollout of many new technologies to the region, including EcoBoost engines, SYNC in-car connectivity, inflatable rear seat belts, MyKey and other driver assist technologies.

2015 Ford Mustang
The all-new Mustang is the most advanced version yet of the iconic pony car, offering more advanced driver-assist technology than any other car in its class. The sleek new design of Mustang fastback and convertible is backed up by world-class performance from a range of available engines, including a new turbocharged EcoBoost 2.3-liter and an upgraded 5.0-liter V8 with more than 420 horsepower. In addition to state-of-the-art connectivity systems, Mustang features available track apps, launch control and more. 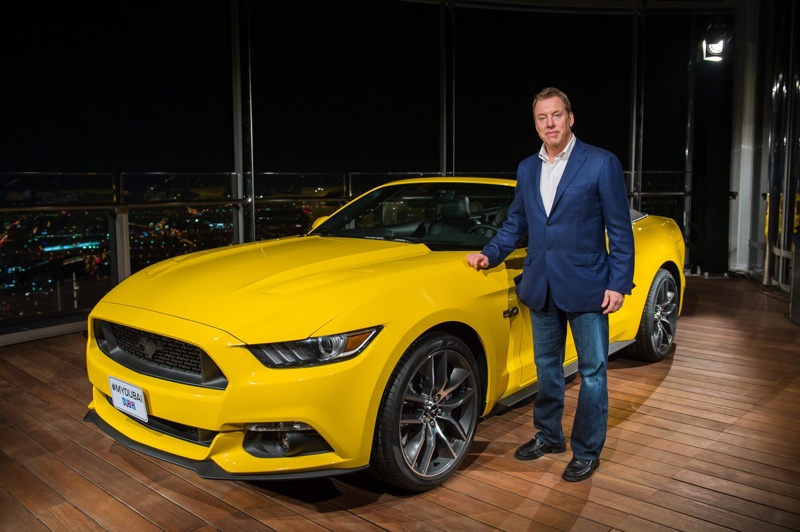 Ford Mustang was revealed to the world with a television advertising campaign on the evening of April 16, 1964, before being shown to the public at the New York World’s Fair on April 17. The car officially went on sale that day, and Ford dealers accumulated a record 22,000 sales and orders that first day on the way to more than 418,000 sales in the first year and 1 million sales in less than two years. Over the past five decades, more than 9 million Mustangs have been sold.

“Almost 50 years ago Ford captured the world’s attention by placing a 1965 Mustang Convertible atop what was then the world’s tallest building, the Empire State Building in New York City,” Bill Ford said. “Today’s event in Dubai, home to the world’s current tallest building, completes an incredible global journey for Ford and Mustang.”

A team of six engineers travelled with the special Mustang from Ford’s world headquarters in Dearborn, Mich., to Dubai aboard an Emirates Airlines flight. Once the car arrived in Dubai, it was transported to the base of Burj Khalifa and carefully separated into six sections that could be transported to the 112th level via the building’s elevators. The team reassembled the vehicle over approximately 12 hours.