Sung Kang and his buddies don’t play golf on the weekends to escape for a few hours. Instead, they escape to the garage for some quality hang time while they build amazing, custom cars.

“We are three friends who wanted an excuse to get out on the weekends and get away from the wives for a day or two and relive that garage/weekend warrior feeling,” says Sung Kang, a Hollywood actor known for playing the recurring character Han in The Fast and the Furious film series.

In 2015, Kang and his buddies customized a Nissan 240Z they bought off Craigslist, again, as a way to spend some time together. Kang took to social media to ask a few innocent questions they had about the build, and the project went viral, gaining interest from the public and corporate sponsors.

“We took that car to SEMA and won Best in Show and went on the Jay Leno show,” Kang says.

That segued into the build Sung got to work on this year for the 50th SEMA Show.

“A lot of sponsors were approaching us to do another build, but I’m not one of those dudes who feels he can get a free ticket to the table just because he was in some movie, and I feel I’ve kind of overextended my stay,” he says. “I’m not a builder, I’m not a racecar driver, I’m not a significant collector – I’m none of those things. I just wanted to have memories in the garage with my friends, and through that I made new friends and got to relive my fantasy of building a car.”

While Sung may not consider himself a true builder or a driver, etc., he does help inspire a large group of people through his role in Fast and Furious, so he put that fame to good use.

“I went back to those sponsors asking me to do something and said let me do a project where I can give that garage experience to three kids who would never have these opportunities, then that is something I could champion,” Kang says. “I’ll pool my friends and we’ll be mentors to these three kids who we will find in the public school system who are passionate about being in the automobile industry. We need to pass down our knowledge and give those kids opportunities they would otherwise never have in terms of meeting the right people and getting jobs in the automobile industry.”

Dubbed ‘Project Underdog,’ companies such as Pennzoil, Ford, GReddy, Rocket Bunny and others couldn’t resist the great idea and were very supportive of the project from the start. Kang’s buddy, Mike Spagnola at SEMA, had been doing similar programs with students for years, and is a graduate of Alhambra public school system in California where he has a yearly scholarship he gives.

“We went to the school’s annual shop class banquet and there were a couple hundred students there, and I started talking to the shop teachers, the principal and the guidance counselors,” Kang says. “I told them, ‘I have this idea called Project Underdog and I want to build a ’72 Maverick, because I drove a ’71 Maverick in Fast Five. The Maverick is the ultimate underdog. It’s kind of this obscure car that people look at and it never really got the credit that it should have. But in Brazil there is this love affair and fervor for it because in ’74 they started manufacturing it there. It’s their muscle car and they love it. That’s a car I wanted to build one day and make it a resto mod, and that’s what we did.”

Kang and his group found three kids from Alhambra High School – Alexis (has recently graduated), Tony (a junior) and Christian (a senior). They come from rougher backgrounds in the East LA area and were picked based on an emotional level Kang and his partners had when they met these kids and felt they could be big brother figures and mentors to while they build a really amazing car.

“We are showing them the American dream and that it is available for these kids,” Kang says. “I want to help these kids think beyond East LA and being an oil change mechanic.”

When Kang was a kid, he got a similar experience from a neighbor who let him watch and ask questions about a ’63 Impala the neighbor was restoring.

“To me a garage is where a kid can learn and find a mentor and learn things that you need in life as a young man from other brothers or older guys, and sometimes learn things not to do,” he says. “This project really isn’t about the final product, it’s about the journey and the shared experience.”

In addition to the experience this program is providing, the completed car will be auctioned off and 100% of the proceeds go towards these kids’ college fund through the SEMA Memorial Scholarship Foundation.

To help show the kids what the automotive industry can offer, Kang and the kids took a field trip to Universal Technical Institute (UTI). During the field trip, UTI gave Alexis a $50,000 scholarship on the spot. This was before the car was ever unveiled or sold.

“The stuff away from the camera and away from the garage was more about introducing them to all of our friends,” he says. “We took them to PlayStation and saw Grand Turismo. We introduced them to other builders like the designer of the Ford GT. They got to meet all these amazing people who through the similar passion of automobiles found their calling in a certain area such as designer, builder, mechanic, painter, bodywork or even video game design. We wanted to show them the possibilities are out there. For me, that was what my life was all about. Somebody came over and said, ‘Hey, I believe in you.’ That’s what I want to give back to these kids. They live in a four-block radius of their future in the sense that they don’t think they can be an actor, or a designer for Ford, or work for Porsche, etc. They’re thinking of changing tires at a local shop. There are so many more opportunities beyond that.”

Another critical partner to Project Underdog was the team at SEMA, and the folks in the SEMA Garage.

“The SEMA guys are car guys, so they stop by and they wrench and they take the kids home, take them to eat, took them to a Dodgers game,” Kang says. “They even brought them to get their first suits so they could meet Chip Foose when he was being inducted into the Hall of Fame. The program has been amazing for these kids and I hope they find their path after this and they realize that their passion can lead them to happiness and success in their life.”

While the kids got to meet people they’ll look up to for a long time and experience new things in the automotive industry, they were excited about the opportunity to build the ’72 Maverick.

“Through our sponsors basically the whole car was donated from the brakes, custom wheels and tires to grills and Brazilian-only manufactured parts,” Kang says. “Brazil sent us the center console that was only available for the Maverick GT that was made in Brazil because we want to go manual and the American Mavericks didn’t have the center console. Ford sent us the front clip so we could be able to use the EcoBoost 2.3L engine, which is a tip of the cap to the 2.3L overhead cam that the Maverick used in Brazil in ’74.

And then GReddy, my partners from last year, are doing the turbo, wiring and plumbing for the car.”

The car came together with the help of Kang’s buddy Steve Strope who is an award-winning car builder and provided advice on how to make the Maverick a custom build.

While the engine is certainly special, the interior isn’t just run of the mill either. Kang got a call from partners he has in Dubai who wanted to lend a hand.

“My friends in Dubai at CarbonSignal reached out and said they wanted to support this build, even though they knew nothing about Mavericks,” he says. “So I sent them every piece of the interior and they made molds of it and everything is carbon fiber, Alcantara and the finest leather. You’ll never see a Maverick interior like this one. This is going to be the most customized Maverick in history.” 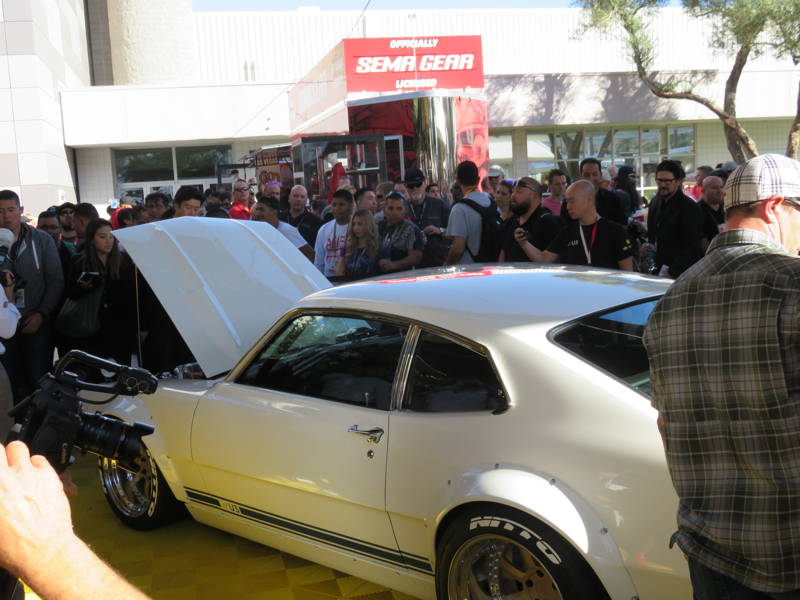 The body kit came from Japanese company Rocket Bunny. The company took the renderings and created something unique for the car.

“The styling cues are now very current,” he says. “It’s understated and simple, but when you get close to it you can see all the details.”

It took a lot of support from companies and people wanting to help give these kids special experiences. Through all that work the car was completed just before it had to be sent off to the SEMA Show in Las Vegas for it’s November 1 unveiling. The car was unveiled at the show in the Pennzoil booth outside the Las Vegas Convention Center to a packed crowd of media, automotive industry professionals, fans, and family.

“Without Pennzoil, SEMA and its relationships and my relationships, we probably couldn’t have built this car,” Kang says. “There are a lot of people we have to thank, and the kids were great. UTI wants to continue giving a scholarship every year if we’re able to continue this. Pennzoil wants to continue it, but I don’t want this to become a massive commercialized thing. It’s really about the individuals who are mentoring and touching these kids’ lives.”