Those visiting Mazda Raceway Laguna Seca or traveling the Monterey-Salinas Highway (State Route 68) will notice a giant, cut-out painting on the hillside of motorcycle racing legend Wayne Rainey riding a Yamaha YZR500. A mural painted on a plywood board, the motorcycle stands at 18 feet long and 12.5 feet tall.

The artwork celebrating the three-time 500cc Grand Prix motorcycle champion and the 60th anniversary of Mazda Raceway Laguna Seca was created by Salinas, CA resident John Cerney from a still photograph taken by Mike Doran. The Sports Car Racing Association of the Monterey Peninsula (SCRAMP) commissioned Cerney to make the Rainey mural and another soon-to-be-revealed design that will also decorate the County of Monterey-owned Laguna Seca Recreation Area. More of Cerney’s work can be seen here. 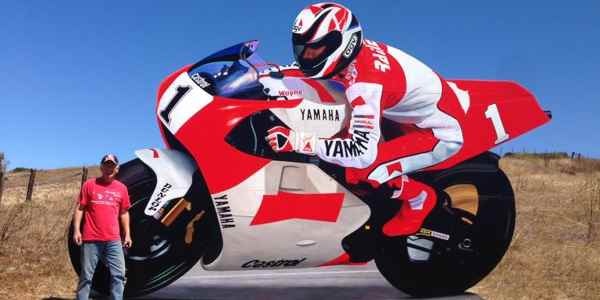 Rainey, who lives in Monterey, won three straight championships from 1990 to 1992 and scored three consecutive U.S. Grand Prix wins at Mazda Raceway Laguna Seca between 1989 and 1991. Rainey remained involved in motorcycle racing despite suffering a career-ending accident in 1993 that left him paralyzed. He serves as president of MotoAmerica.

During the Rolex Monterey Motorsports Reunion on August 17-20, Rainey’s 1989 Yamaha YZR500 will be part of the Racing Through the Decades feature display that includes prominent racing machines tied to the 60-year history of Mazda Raceway Laguna Seca.

“It’s certainly a nice splash of color on the hill to get people revved up about the racing and the track itself,” said Cerney. “My job is simple once I get a picture, and I got a great shot from Mike Doran. Knowing the story of Wayne Rainey makes the painting mean more to me. I treat it with care knowing it is a racing legend who was brought down early in his career and is still active in the field.

“I wanted to do it right and be cognizant of every little thing going on in the picture. For example, there was something on his glove that was a little fuzzy in the picture, so I did some research online to find that it was his autograph. I wanted to catch all the little details I could to remove any doubt that it’s him.”