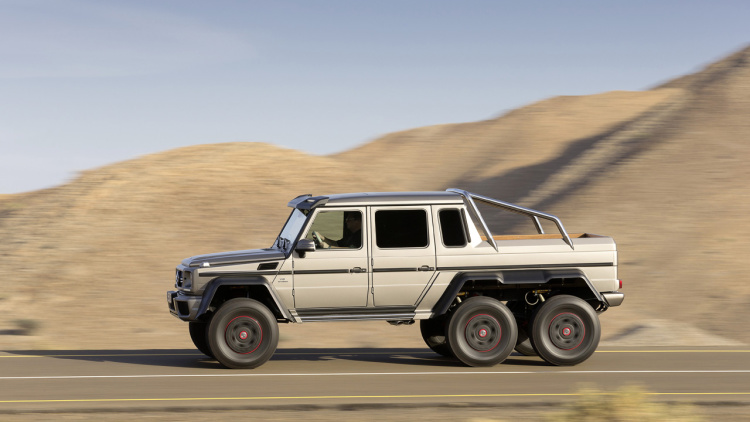 A while back, when Mercedes said they would build a 6×6 version of the G63 AMG, most people thought they were joking. But the joke was on the naysayers. Mercedes announced that two had already been sold and that production would run for as long as demand remained, within a reasonable time frame. Now, the 6×6’s time has come and gone; it’s leaving us as quickly as it came.

The G63 AMG 6×6 has had a production run of 100 units, and now Mercedes is pulling the plug on the program. Anyone who was lucky enough to snatch one up didn’t get their’s cheap though. A well-equipped G-wagon 6×6 would cost you well over $400,000. The 5.5 liter twin-turbocharged V8 made the G63 AMG 6×6 a force to be reckoned with, and the car could likely give any other off-road vehicle or SUV a run for its money.

Even though the 6×6 is a thing of the past now, Mercedes isn’t giving up on the G-Class name-plate. They’ve announced a new performance version of the G63 AMG, called the G500 4×4², which is powered by the same 4.0 liter twin-turbocharged V8 found in the AMG GT. The car will be tuned to near 500 horsepower and will debut at the Geneva Motor Show next month.

Of course, if you’re dead-set on a 6×6, you could always wait until one pops up on the used market; however, expect them to retain value pretty well.