In an X Games first, Harley-Davidson Snow Hill Climb will make its debut at X Games Aspen as a medaled event alongside ski, snowboard and other action-sports competitions. The new medal sport will close out X Games Aspen 2018, which airs January 25-28 on ESPN and ABC. 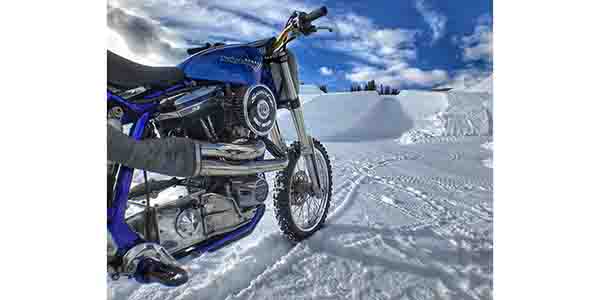 The first racer to ride the length of the SuperPipe and clear the finish line at the top will earn the “W.”  Each Harley-Davidson Snow Hill Climb race motorcycle consists of an extended swingarm widen frame and a high-torque, twin-cylinder motor.

“For 115 years H-D riders from all walks of life have expressed their freedom from the seat of America’s favorite motorcycle, so it’s natural for us to continue to blaze trails – this time off the road and in the snow,” said Scott Beck, Harley-Davidson director of marketing. “We’ve raced the ice and climbed virtually every kind of hill, and the Harley-Davidson Snow Hill Climb is another way for us to grow the sport of motorcycling. We know our riders, and X Games fans and athletes alike share a passion for adrenaline and speed.”

The gold-and-bronze-medal rounds of Harley-Davidson Snow Hill Climb will air January 28 at 10:45 p.m. ET live on ESPN. Preliminary rounds and qualifying will stream live at 10:15 p.m. ET exclusively on facebook.com/harley-davidson.

“There’s a story behind every mile you ride on your Harley-Davidson, and I’m honored to be one of the first to ride mine up the Snow Hill Climb during X Games 2018,”  said Josh Mueller, who’ll be racing a modified Harley-Davidson Sportster motorcycle. “History will be made in Aspen, and every athlete will look on with envy as we race up the SuperPipe.”

To learn more about Snow Hill Climb and see the bikes in action, check out Harley-Davidson’s YouTube channel.
ESPN, ESPN2 and ABC will televise a combined 15.5 hours of live X Games Aspen competition in high definition, which will also be accessible via the ESPN app and WatchABC to viewers who receive their video subscription  from an affiliated provider. An additional eight hours of competition will be carried digitally/ESPN3 as well as the latest coverage across ESPN digital platforms, including XGames.com, X Games app, X Games pages  across Twitter, Facebook, Instagram, Snapchat and more.
Show Full Article