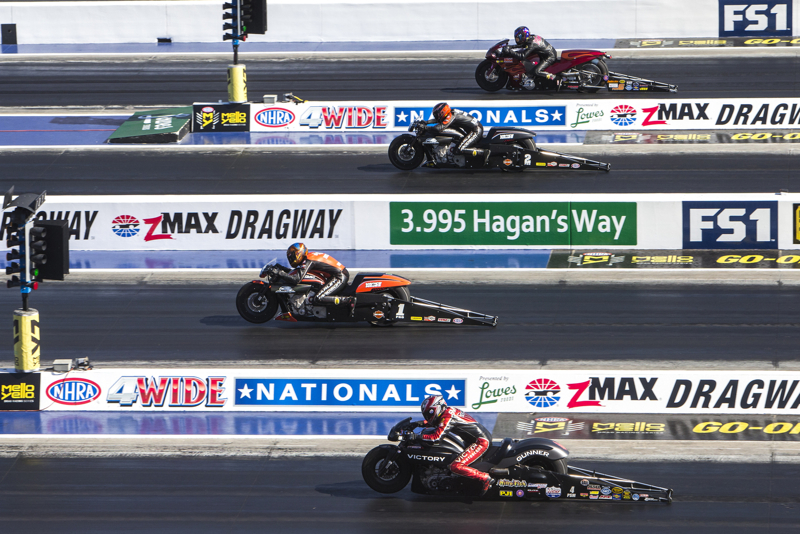 Harley-Davidson Screamin’ Eagle/Vance & Hines rider Andrew Hines scorched the Pro Stock Motorcycle final to win the NHRA Four-Wide Nationals presented by Lowes Foods at zMAX Dragway. Competing in a unique four-wide format aboard a Harley-Davidson V-Rod motorcycle, Hines finished second in two elimination rounds to advance to the final and won the event for the third consecutive year while claiming his first win of the 2016 season.

“I think the Four-Wide is the only event where you can lose a round and still win,” said Hines, the defending NHRA Pro Stock Motorcycle champion. “We put a fresh motor in my V-Rod on Saturday, and I had a strong-running motorcycle today. The Screamin’ Eagle team won the first two races this year, so we are off to a great start. We are really happy with our performance and the way the bikes are responding to tuning.”

Hines qualified fourth for the event with a best run of 6.837 seconds. Hines won the final with an outstanding reaction time of 0.002 seconds to launch his motorcycle on a 6.844-second run and a top speed of 195.42 mph. The win this weekend was the 43rd career final-round victory for Hines and the fifth in his last six races at zMax Dragway.

Harley-Davidson Screamin’ Eagle/Vance & Hines rider Ed Krawiec, the Pro Stock Motorcycle points leader, also advanced to the Four-Wide final and finished second to Hines. Until the final, Krawiec was dominating the event, riding his Harley-Davidson V-Rod motorcycle to the top spot in qualifying with a 6.818-second elapsed time on Friday, winning his first two elimination heats on Sunday and setting the quickest time of the weekend with a 6.810-second blast in the second round of eliminations. Krawiec has been the runner-up at the last four Charlotte Four-Wide events.

Hines and Krawiec race on competition motorcycles inspired by the unrelenting performance and sleek street style of the Harley-Davidson Night Rod Special, a motorcycle powered by a liquid-cooled 60° V-twin engine ready to breathe a little fire onto the street and available now at authorized Harley-Davidson dealerships.

After two of 16 Pro Stock Motorcycle events on the 2016 NHRA Mello Yello Drag Racing Series, Krawiec leads the class with 232 points and Hines is in second place with 197 points.