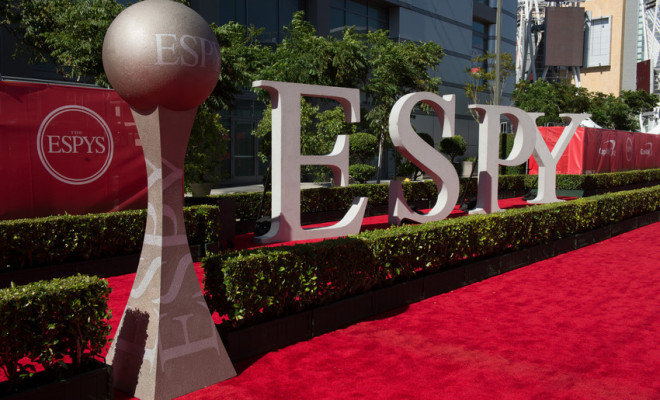 For 23 years, ESPN has honored top athlete performances from around the globe, covering everything from curling to basketball. And lucky for us, because the ESPYs cover such a wide path, motorsports stars are often thrown into the mix as well.

Fans, you did it! You voted @KevinHarvick #BestDriver at the @ESPYS last night. From all of us at SHR, thank you! pic.twitter.com/MkphCabavX

The biggest stars from the worlds of sports and entertainment gathered in downtown Los Angeles at the Microsoft Theater on Wednesday night to celebrate the best sports stories of the year at the 2015 ESPYS Presented by Capital One. The show was hosted by actor Joel McHale and aired on ABC.

The ESPYS commemorate the past year in sports by recognizing major sports achievements, reliving unforgettable moments and saluting the leading performers and performances. Big stars such as Danica Patrick and LeBron James were among the presenters at this year’s show, which included awards for NASCAR’s Kevin Harvick for Best Driver and Supercross champ Ryan Dungey for Best Male Action Sports Athlete.

We think that motorsports should have a few more categories but maybe we’ll save that for the Speedville Awards! If you have any categories we should include, pass them along in the comments section.

Wow! Just found out we won the ESPY for “Best Male Action Sports Athlete”! It’s a very exciting day for the Sport of Motocross/Supercross and how far we have come to achieve this award! Without a doubt wouldn’t have been possible with out my wife and family, friends, sponsors and most importantly you fans. Thank you all for you support, love, and votes, and everyone who had a part in making this dream come true, So very Thankful and Blessed #ESPYs @lindsay_dungey @mamadsworld @big_diesel_5 @jadedungey @blakedungey @ktmusa @redbull @foxracing @oakley @mobiusbraces @target @wheatiescereal @trekbikes @polarglobal @aldon104 @lizbaker777 @bakersfactory @teamdrg