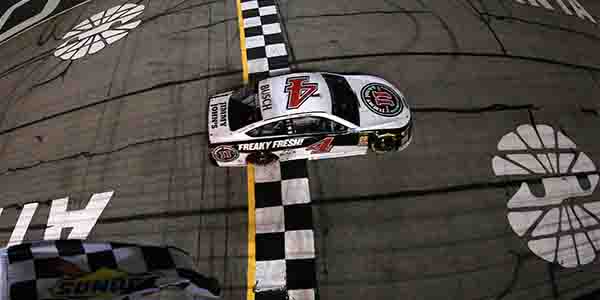 “Congratulations to Kevin, Stewart-Haas and the entire Ford organization,” said Doug Yates, president and CEO of Roush Yates Engines. “I’m so happy for Kevin. This was a great way to finish the weekend. We are honored to partner with Ford to power these Ford Fusions.”

“I’m just so proud of everybody on our team,” Harvick commented. “That was the first win in my career and to be able to do that and pay tribute to Dale was pretty cool. I’ve been waiting a long time to do that.  We’ve had so many days where we could do that here, but I just want to thank everybody who puts this car on the race track and for five years it’s been so fast at this particular race track and a lot of other ones. I love racing here and it’s good to be back in Victory Lane finally.” 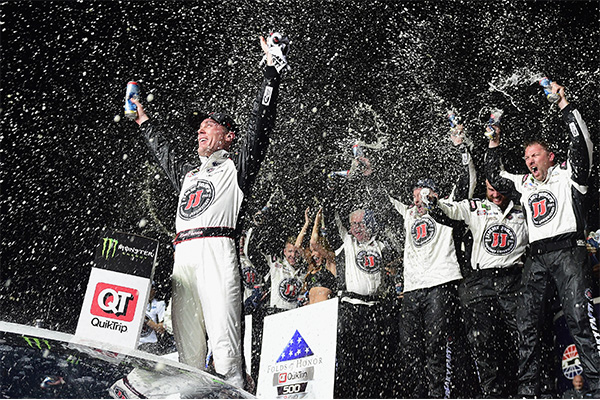 Harvick with the Ford FR9 horsepower under the hood of the Ford Fusion dominated the race by leading 181 out of the 325 lap race and recorded a new track record for total laps led (1,152). After winning Stage 1, the race came down to a 22 lap shootout between Harvick and Keselowski. Lined up side-by-side on the front row, Harvick launched the No. 4 on the restart and never looked back until he took the checkered flag, finishing 2.690 seconds ahead of Keselowski to take home his first Cup win at Atlanta since 2001.

Joining Harvick, Keselowski and Bowyer in the top-10 were Joey Logano in P6 and Kurt Busch in P8. 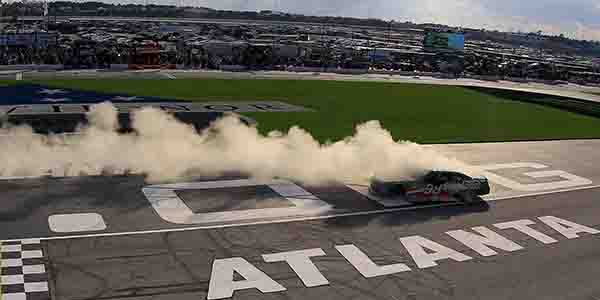 In the NASCAR Xfinity Series, Harvick drove the No. 98 Ford Mustang to win the first NASCAR Xfinity Series race for new team partners Stewart-Haas Racing with Biagi-DenBeste in the Rinnai 250. Ford teammate, Joey Logano in the No. 22 made it a 1-2 finish on the 1.5-mile track.

Harvick, starting in the fifth position took control of the race early on by winning Stage 1 and Stage 2. Harvick seemed to be on cruise control, putting the 98 in the right spot at the right time with perfect execution to lead 141 laps out of the 163 lap race, recording his fifth career NXS win at Atlanta. 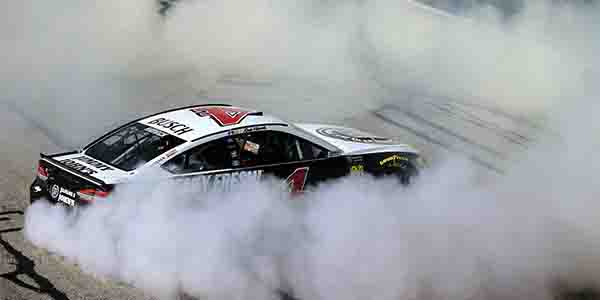 Four Fords finished in the top-10. Harvick and Logano were followed by Team Penske teammate Austin Cindric in P7 and Ryan Reed from Roush Fenway Racing in P10.

The Ford teams will ride this momentum out west to Las Vegas this weekend. Reference the full 2018 schedule on www.roushyates.com.