The man credited as the “Father of the Hemi”, who also helped develop the Max Wedge, the 1970 Plymouth AAR ‘Cuda, and the 1978 Dodge Li’l Red Express truck, has died. Tom Hoover, who joined Chrysler in 1955, passed away on April 30 after a long illness. He was 85.

Hoover trained as a physicist at Juanita College in his hometown of Huntingdon, PA. He received his master’s degree from Penn State and later earned a master’s degree in automotive engineering from the University of Michigan while working for Chrysler.

Hoover joined Chrysler in 1955, and soon became a member of the Ramchargers team, a group of about eight drag-racing-fanatic engineers. While part of this team Hoover helped develop a drag-racing performance package for 1962-model Dodges: the Maximum Performance Wedge 413-cubic-inch engine, which was soon shortened down to Max Wedge. By 1963, that engine grew to 426 cubic inches.

While the Max Wedge engine was instantly successful in drag racing, it wasn’t competitive against GM and Ford engines in NASCAR racing. By that time Hoover was head of the Race Engine Group at Chrysler and under the direction of the corporation’s new President, Lynn Townsend, he was tasked with winning the 1964 Daytona 500.

Although development of the 426 Hemi didn’t start until April of 1963, progress was rapid. The basic idea was to use the Wedge engine’s block with new cylinder heads that took advantage of Chrysler’s successful hemispherical-shaped combustion chambers from earlier engines. In particular, they used what were basically the combustion chambers designed for the stillborn “A-311” Indy racing V8 developed in the early ’50s.

The Hemi was so successful in NASCAR that Richard Petty’s victory in the 1964 Daytona 500 was but one of nine victories he’d take that year in Plymouths as he cruised to his first season championship. And it led NASCAR to change its rules for 1965 that effectively banned the Hemi engine and led to Chrysler’s boycott of the series for most of that year.

But NASCAR changed its rules again and that led Chrysler to develop the 425 “street” Hemi for the 1966 model year in order to homologate the engine for NASCAR competition. Soon Hemi-powered Dodges and Plymouths became legendary performers on the street and the most cherished (and most valuable) of collectible muscle cars. 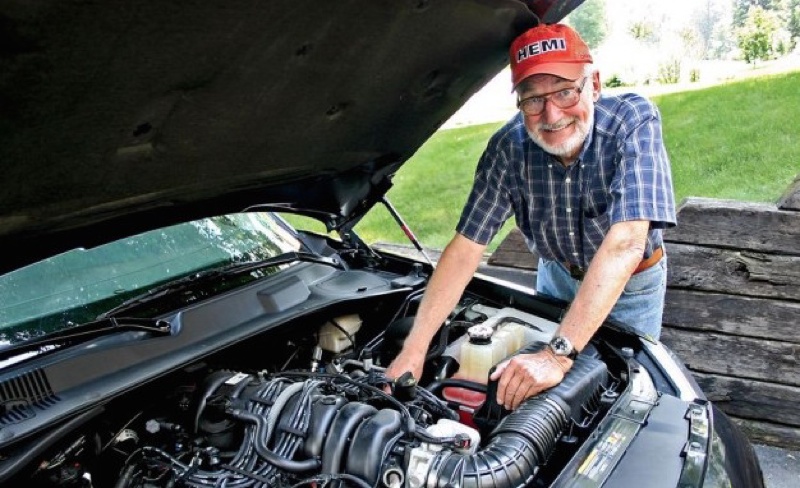 While the Hemi continued to dominate NASCAR—in 1967, Petty won an amazing 27 races driving Plymouths—it was also proving a sensation in drag racing. The 426 Hemi soon dominated the Super Stock classes while supercharged versions running on nitromethane became so overwhelmingly successful that today virtually all Top Fuel and Funny Car engines are based on the 426 Hemi design.

Hoover retired from Chrysler in 1979 and went on to work for several other companies before retiring for good. What Hoover helped accomplish with a small group of engineers produced true legends that live on in yesterday’s and today’s Hemi V8s.