When it comes to the world’s fastest production car, there’s a new king in town, and it isn’t a Bugatti. In fact, it’s built right here in America, with an American V8 under the hood. 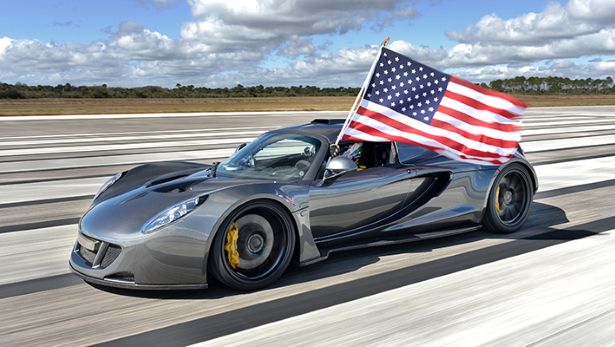 As it sped along NASA’s former Space Shuttle runway in Cape Canaveral, Florida, the Hennessey Venom GT clocked in at an unprecedented 270.49 miles per hour to unofficially become the world’s fastest production car. The previous title holder was the Bugatti Veyron Super Sport, which had been clocked at 269.86 mph. 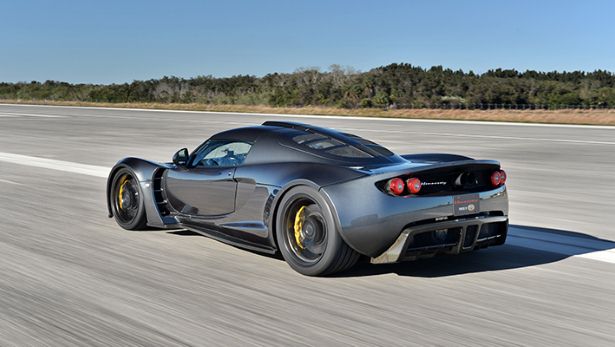 Since making its debut in 2011, the Venom GT has been manufactured by the Texas based Hennessey Performance Engineering. The car itself is built on a heavily modified Lotus Exige chassis, having a curb weight of around 2,700 lbs. For power, the Venom GT is fitted with an improvisation of GM’s 7.0 liter V8 fitted with twin turbochargers, with the most powerful variant producing roughly 1,244 horsepower; the Venom GT is available in 750 or 1,200+ horsepower variants. 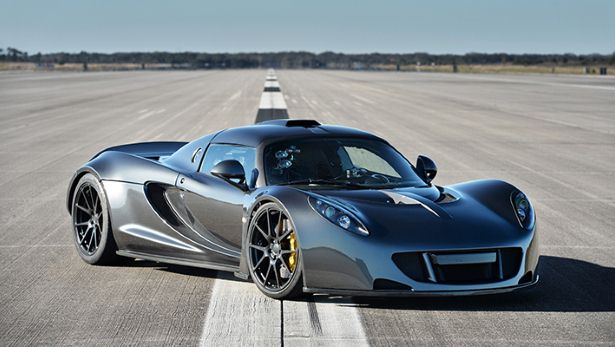 In addition to its groundbreaking top speed numbers, the Venom GT has racked up an amalgam of other impressive performance stats. In 2013, the Venom GT became the world’s unofficial fastest accelerating production car when it accelerated from 0-200 mph in a mere 14.4 seconds. During its recent top speed trial run, the Venom GT also clocked in a 20-120 mph acceleration time of 7.71 seconds. The 0-60 mph acceleration time is 2.7 seconds, which is a smidgen behind the Bugatti Veyron’s 2.46 second time and the record holding Ariel Atom V8’s 2.3 seconds. 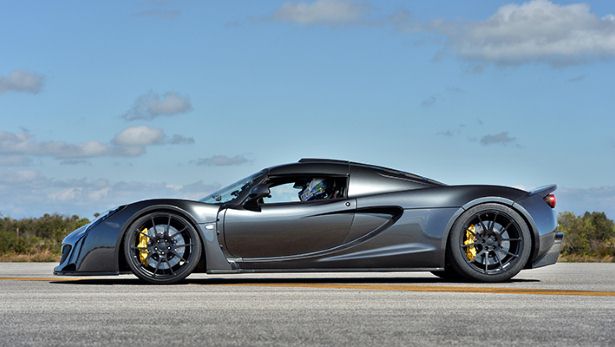 Despite the impressive top speed, performance, however, the record remains “unofficial,” because the test run did not meet the criteria set forth the by Guinness for verifying top speed numbers. While the numbers were clocked legitimately, and no one is doubting that the Venom GT actually did breach 270 mph, what is in question is the influence of other external factors, such as wind, weather, or track differences. For this reason, Guinness requires that, in order to verify a top speed, a car must run the track once in each direction and take the average of the two times; this accounts for wind differences between the two sides of the track. Hennessey contends that wind difference was negligible anyway, because only a light quarter wind was blowing. Hennessey also asserted that the car would have had no problem running in both directions, but NASA would only allow them to run in one; in other words, it’s the space guys’ fault. Guinness also stipulates that, in order to qualify as a legitimate production car, at least 30 model units must be produced; Hennessey only intends to build 29 Venom GTs. 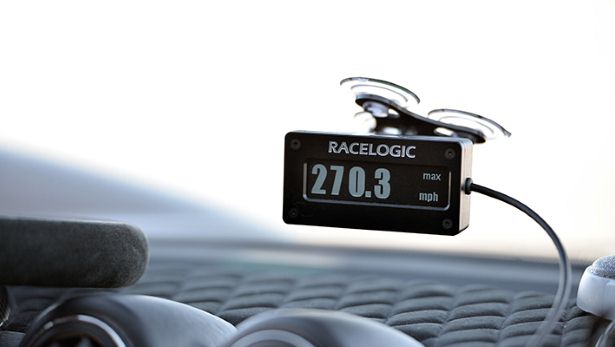 Even though the Bugatti aficionados may attempt to impugn the venerability of the Venom GT’s run, it seems clear that the Hennessey is actually the faster car. NASA’s track was the best Hennessey could get their hands on, but the track is still only 3.22 miles long, with test driver Brian Smith contending that the car never stopped accelerating and, had he had a couple of extra miles of track, he could have squeezed 5-10 more mph out of the car. In comparison, the Veyron makes all test runs on Volkswagen’s 5.5 mile long Ehra-Lessien test tack in Germany. Also of note, is that while the Hennessey was tested on a runway, many other record holders run tests on purpose built tracks like Volkswagen’s. It seems rather obvious that, if given access to better testing conditions, the Venom GT may have performed even better; Hennessey boss John Hennessey believes that the car is capable of 280 mph.

Despite all of the attention garnered by the top speed run, Hennessey has announced that the Venom GT is, for the time being, finished with top speed tests. Rather than duke it out for the top speed title with the Veyron and a cadre of the world’s other top performing cars, Hennessey is more concerned with validating the Venom GT’s all around performance. They intend to run the Venom GT on some of the world’s most reputed tracks and have hopes of making it to the Top Gear track in Dunsford, England. John Hennessey believes that, with the Stig at the wheel, the Venom GT could set a record there. Top Gear seemed open to the idea of a Venom GT test drive, so keep your eyes out for it next time you’re watching.