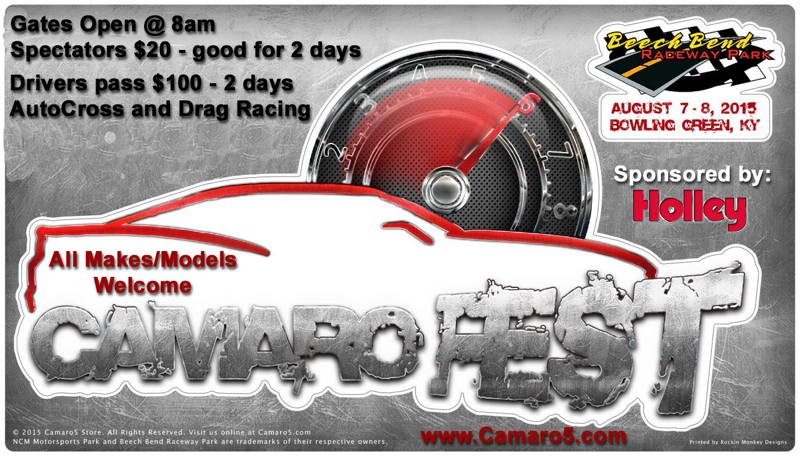 Camaro Fest is similar to the Holley LS Fest event coming up September 11-13, 2015, but is focused primarily around Chevrolet’s early and late model Camaro muscle car. Camaro Fest has previously been open to only Chevrolet Camaros, of which more than 750 are expected to attend. For 2015, event promoters are opening up the event to both Corvettes and Cadillacs.
Thursday, August 6, the NCM track will host a track day for participants that will take place on the tracks Grand Full configuration. The Grand Full course is a 3.15 mile setup that featuring technical turns, elevation changes, and chicanes, as well as impressive speeds.Friday and Saturday will take place at Beech Bend Raceway and feature an autocross hosted by Music City Camaro Club. To register for the autocross, visit www.camarocross.com.

Drag classes are also a large part of Camaro Fest. Fifth Gen drag classes from stock V6 to Unlimited V8 are available for participation. Bracket racing will be available for any registered car including Corvettes and Cadillacs. Specialty classes and grudge matches will also be available for participation. Drag class finals will take place on Saturday afternoon. Non-GM cars are also welcome to compete in the drag strip or autocross but will not be eligible to win in any other event than in bracket racing.

For those interested in keeping their Camaro looking pristine, bring your ride out to participate in the Camaro Fest Show-N-Shine.  This Saturday-only event is free with event admission, and features the following judged classes: Best first to fifth generation Camaro, Best Paint, Exterior, Interior, Engine Bay, Firebird, Best of Show and club participation.

Camaro fans also have the opportunity to take a plant tour of the Corvette Assembly Plant on Thursday and Friday of the event.

Admission to Camaro Fest at Beech Bend Raceway is $100 for a two day participant driver wristband, or $20 for a two day spectator wristband. The host hotel for the event is the Holiday Inn University Plaza located at 1021 Wilkinson Trace, Bowling Green, KY.