Holley has announced that it is the official drag racing sponsor for the first of what is sure to become an annual event in Bowling Green, Kentucky; The Danchuk Tri-Five Nationals. The Tri-Five Nationals will be held at the historic Beech Bend Raceway, August 14-15, 2015. It is shaping up to possibly be the largest event ever for ‘55,’56, & ‘57 Chevrolets. The 1955 Chevrolet is one of the most iconic and sought after collector cars of all time, and 2015 is its 60th anniversary. 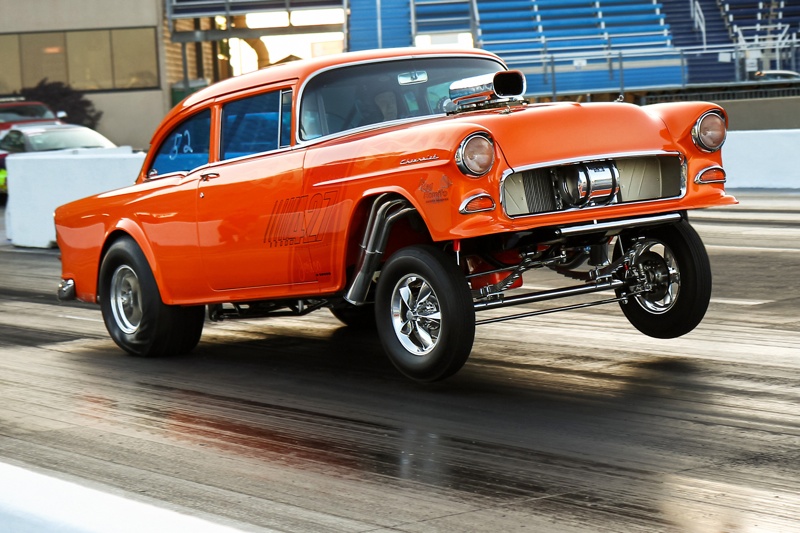 The crew at Woody’s Hot Rodz in Bright, Indiana decided this landmark was worth celebrating and have organized this must-see event. “These cars have always been our passion, and since our entire business is now focused on remanufacturing all new ’55-’57 Chevys, the time seemed right for a national event focused on Tri-Five Chevys”, said Chris Sondles, owner of Woody’s Hot Rodz.

The Holley Tri-Five Drags will be a major part of this celebration and will feature three heads up racing classes and two bracket classes just for 55-57 Chevys. Classes for DOT Stock, Junior Stock, and Nostalgia/Gasser will be heads up while Junior Eliminator and Top Eliminator will be bracket classes. This ensures fun and competitive racing for anyone who wants to participate, whether you have a bone stock straight-six powered Bel Air or a fire-breathing gasser capable of running in single digit territory. Drag entries are $100 and include admission for two, plus pit parking pass, and racer golf cart pass. Camping credentials will be an additional $65 for the weekend.

All racing will be 1/4 mile. Friday the 14th will be tech, test & tune, and qualifying. Eliminations will take place on Saturday. Exhibition cars will also run both Friday & Saturday, featuring 2014 Hot Rod Magazine Drag Week champion Jeff Lutz with his 6 second ’57 Chevy, and Dave VerSchave’s awesome 1955 Gasser as seen in the March 2015 issue of Hot Rod Magazine. Check out Holley’s video with Dave at the 2014 Holley NHRA Hot Rod Reunion to learn about the background and inspiration that led to the “Orange Krate” being built HERE.

Spectator gates will be open at 8 AM on both August 14 and 15. For more information: www.thetrifivenationals.com or call 855-567-1957. If you would like to register as a drag racing participant, open this .PDF document  and follow the directions within.