Officials of NHRA have announced that the 2017 NHRA Mello Yello Drag Racing Series Awards Ceremony will once again return to Hollywood’s Ray Dolby Ballroom at Hollywood & Highland on Monday, Nov. 13. 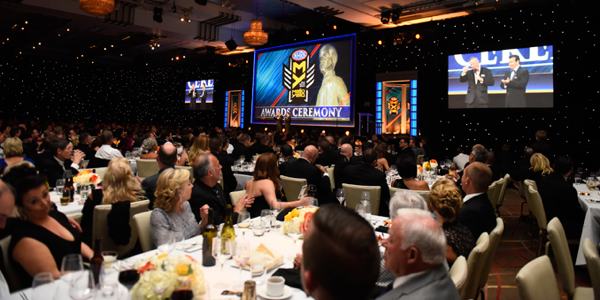 The invitation-only black-tie affair, where NHRA will honor its 2017 Mello Yello Drag Racing Series world champions in all four categories, will begin with a pre-event cocktail reception at 5 p.m. A formal sit-down dinner will follow with cuisine provided by Wolfgang Puck Catering. The official after party at the nearby Hard Rock Café will end the evening’s festivities.

NHRA also announced that the entire NHRA Mello Yello Awards Ceremony will be available for viewing via nhra.com/mydrs-awards on Friday, Nov. 17. It marks the ninth year that the full event will be available to fans via the internet.

Champions in the NHRA Lucas Oil Drag Racing Series will be honored earlier in the day at OHM Nightclub, located on the fourth level of the Hollywood & Highland Center, before joining the activities at the Mello Yello Awards Ceremony where they will also be recognized.

The Hard Rock Café, also located at the Hollywood & Highland Center just beside the Dolby Theater, will play host to the official after party. The Loews Hotel & Resort will once again be the host hotel for the NHRA Mello Yello Awards Ceremony.