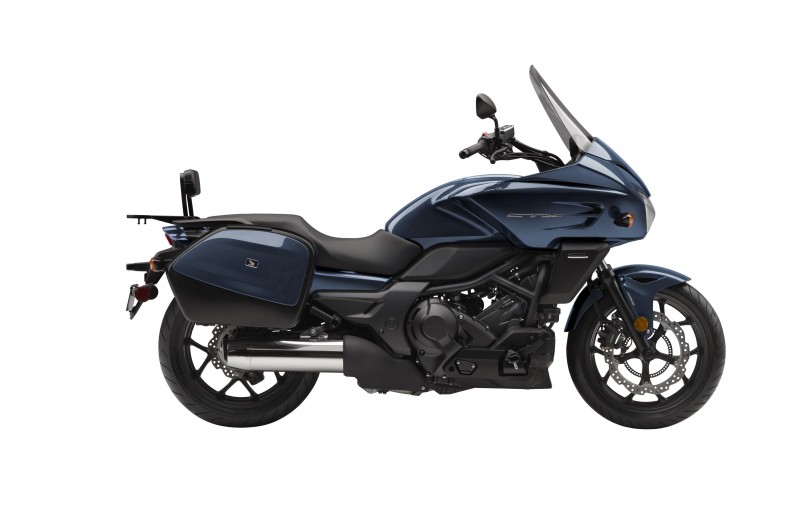 With today’s announcement of additional 2015 motorcycle and side-by-side models, Honda celebrates the racing success of its factory MotoGP team. Commemorating the manufacturer’s record-breaking achievements over the past two seasons, the CBR1000RR and CBR1000RR SP sportbikes are offered with special Repsol Honda liveries. Also introduced are models for adventure touring, cruising, dual sport and enduro, along with a pair of scooters and the popular Pioneer 700 and 700-4 side-by-sides.

“Honda has a long record of success on the racetrack, and we’re proud to recognize the company’s latest accomplishments with a special edition o f the CBR1000RR,” said Lee Edmunds, Manager of Motorcycle Marketing Communications at American Honda. “The CBR supersport series has achieved a myriad of accomplishments in its own right, so we’re happy to offer the liter bike in the Repsol Honda colors of our World Championshipwinning MotoGP team.”

This season saw Honda dominate MotoGP racing, securing the Rider and Manufacturer titles for the second year in a row. With one round remaining in the 2014 season, Marc Marquez has already scored a record-tying 12 victories to clinch his second Rider title four rounds early, at Honda’s home race. Meanwhile, the Manufacturer championship was Honda’s 21st in the premier class and 63rd across all three classes— both new marks. Honda is celebrating by offering its CBR1000RR SP and CBR1000RR with a special Repsol Honda livery, as well as a distinctive championship badge on the fuel tank. These editions even come with No. 93 and 26 number-plate graphics, enabling owners to show their passion for Marquez or his teammate Dani Pedrosa. The CBR1000RR (also available in White/Blue/Red and Red) is an excellent overall liter bike package with a 43mm Showa Big Piston Fork, Unit Pro-Link rear suspension, twin-spar aluminum chassis, assisted slipper clutch and advanced Honda Electric Steering Damper (HESD). There’s also a version with Honda’s revolutionary Combined Antilock Braking System (C-ABS) that’s offered in Red, whereas the track-focused SP (available in the Repsol Edition only) achieves the maximum in performance through fully adjustable Öhlins front and rear suspension, Brembo front brakes, Pirelli Diablo Supercorsa SC premium tires and hand-selected and weight-matched piston and connecting rods.

The CB1000R’s superbike roots are aptly demonstrated by its aluminum chassis and powerful, DOHC 998cc inline-four powerplant, both of which are proudly on display thanks to minimalist, naked-bike styling. A wide handlebar and upright seating position ensure rider comfort for long days in the saddle, making for an incredibly versatile open-class motorcycle.

Offering impressive performance at an incredible value, the CBR650F and CBR650F ABS house a torquey, smooth, inline-four engine in a nimble-handling, steel, twin-spar chassis, finished off with modern, sportbike styling. The result is a confidence-inspiring middleweight machine that’s great for almost any application, including two-up riding.

Available in both standard and ABS versions, the CBR500R combines aggressive looks evocative of Honda’s supersport models with a torquey, fuel-injected parallel-twin 471cc engine and a riding position that’s sporty but comfortable. The result is a versatile middleweight machine that’s great for everything from recreational riding to commuting.

While Honda’s CB500F and CB500X are both powered by a bulletproof DOHC, liquid-cooled 471cc parallel-twin engine, the packages are very different. The CB500F has a classic, upright riding position, naked-bike styling and a confidence-inspiring low seat height. The CB500X is an adventure bike with an adjustable windscreen, a wide handlebar and a generous 5.5 inches of front suspension travel, 4.7 inches rear. Both are comfortable and capable 500 class machines with adaptable powerbands, and both are also available in ABS versions.

Combining stripped-down, laid-back styling with the iconic, 1832cc opposed-six engine from Honda’s Gold Wing, you get the Valkyrie—a distinctive cruiser that turns heads wherever it goes. It has LED lighting, a slash-cut muffler, 10-spoke cast aluminum wheels, a customizable seat and a twin-spar aluminum frame with a low center of gravity, but what really sets the Valkyrie apart is its smooth and plentiful power.

The 2015 CTX®700N retains its torquey 670cc twin-cylinder engine and innovative styling but has an updated seat that positions the rider 30mm closer to the handlebar for improved comfort. Additional rider-friendly features include a low 28.3-inch seat height, forward-set footpegs and integrated storage, and there’s an available version with a high-tech automatic DCT transmission and ABS.

Available with either a standard manual gearbox or Honda’s revolutionary automatic DCT transmission (DCT option includes ABS), the CTX700 is a futuristic touring machine with a full front fairing. It has a new seat that positions the rider forward, closer to the forward-set footpegs. A full range of comfort- and touring-related Honda Genuine Accessories enable riders to make this bike their own.

Offering classic styling in an economical, unintimidating package, Honda’s entry-level cruiser has a sub-27-inch seat height and legendary Honda reliability. The proven, smooth 234cc parallel-twin engine gets incredible fuel mileage and has plenty of power for highway use. The Rebel has spoke wheels front and rear, with a hydraulic disc front brake for solid stopping power.

A great choice for everything from weekend canyon carving to workday commuting, the NC700X is offered in two versions: one with a conventional six-speed manual transmission and one with Honda’s exclusive automatic DCT (the latter version also comes with ABS). The 670cc parallel-twin engine is powerful but fuel efficient, and there’s an integrated storage compartment that accepts most full-face helmets.

Honda’s popular and lightweight CRF250L is a fuel-efficient dual-sport bike that’s both fun and practical. The fuel-injected, DOHC single-cylinder engine has an electric starter and plenty of low- and midrange torque, while the long, motocross-style seat and upright body positioning are comfortable on the road or in the dirt. Front and rear hydraulic disc brakes are standard.

Touting the convenience and approachability of a scooter but with the highway-ready power of a liquid-cooled, fuel-injected 279cc engine, the Forza™ is a master of adaptability. With features like a CVT automatic transmission, enough storage for two helmets and a 12-volt power outlet, it’s ready for everything from commuting to two-up weekend fun. An ABS version is also available.

Thanks to its stripped-down styling, wide tires and dual headlights, the Ruckus has fostered its own underground culture, marked by dedicated clubs and organized ride days all over the country. Powered by a fuel-sipping, liquid-cooled, single-cylinder 49cc engine, the popular scooter returns for 2015 with simple, rider- friendly features like an automatic one-speed transmission and electric start.

With incredible fuel efficiency and a 22-liter under-seat storage compartment, practicality is the Metropolitan’s forte, but it also offers fun, smile-inducing performance. Programmed Fuel Injection (PGM-FI), a V-matic automatic transmission, a combined-braking system and a convenience hook for groceries are all standard.

Combining MX-focused parts like the Honda Progressive Steering Damper with trail-ready features including a headlight, LED taillight, electric starter and 18-inch rear wheel, Honda created a great off-roader that’s ready for everything from the woods to the desert. The 449cc liquid-cooled engine with Unicam head and titanium intake valves delivers a wide, smooth powerband, and works-style hydraulic disc brakes front and rear slow things down in a hurry.

While the CRF250X receives technology from Honda’s successful quarter-liter MX machine, it also gets off-road-specific features like a wide-ratio gearbox, retuned suspension and electric starting. With a compact, lightweight Unicam engine boasting twin-sump lubrication and a gear-driven counterbalance, as well as a standard aluminum Renthal handlebar, the CRF250X is ready to rule the trail.

Honda’s do-it-all Pioneer 700s have taken the side-by-side world by storm with their versatility and affordability, and now they both have a new dual-rate front suspension designed to deliver a smoother ride while still providing plenty of travel and superior load-carrying capacity. They also feature a hydraulic-assisted tilt bed; durable, beltless automatic transmission; long-travel, double-wishbone front and rear suspension; and rubber-mounted 675cc liquid-cooled engine. There are also a number of comfort and convenience features and a long list of available accessories.

The four-person Pioneer 700-4 boasts the industry’s first QuickFlip™ convertible rear seating design, which can switch from seating configurations for two, three or four people, and it’s available in a new Metallic Silver color. Both the Pioneer 700 and Pioneer 700-4 are designed, developed and built in the U.S.