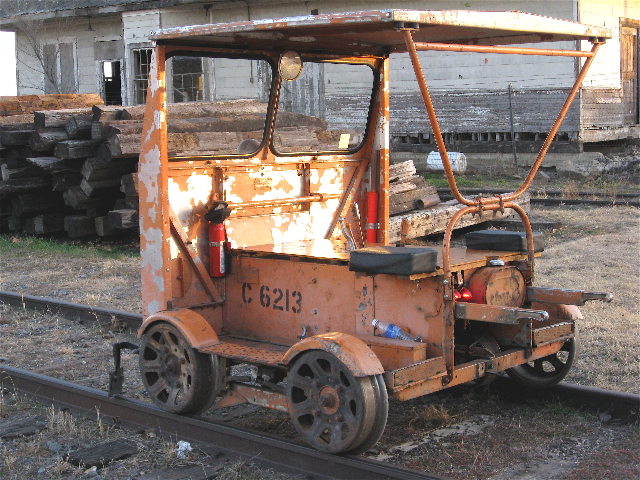 Once you’ve taken the time to wrap your brain around the terms “Fairmont” and “Hot Rod” in the same headline, you should read a little further. You’ll discover this story is not about a Ford Fairmont sedan, but rather a Fairmont Railroad Motorcar – the one built in Fairmont, MN.

I have been in business for 30 years and have figured out that if you look hard enough you’ll find customers who collect most anything with wheels and an engine. I have also learned that you can “Hot Rod” most anything and I am one who tends to NOT leave things well enough alone.

I have collected traditional hot rods for most of my life. But about 10 years ago I decided (mid-life crisis?) it was time for something different. After a year of hunting want ads and sale bills I became one of “those” collectors – I bought a 1946 Fairmont Railroad Motorcar at a local auction.

The hunt was on for somebody who knew something about Fairmont 2-cycle engines. That somebody turned out to be Richard Canaday who, along with his brother Jack, ran a machine shop in Lathrop, MO. Richard had a motorcar himself and understood all of the principles of how a Fairmont 2-cycle engine was designed to work and more importantly how to improve the efficiency (in other words, increase horsepower and torque). He understood my logic that this was an opportunity to squeeze a little more torque and horsepower from this 2-cycle engine.I got it home, got it running and rode it for a year, but it was clear the motor was tired and needed an overhaul. Compression was about half of what it was supposed to be and the oil leaks were numerous.

The bottom end was rebuilt and left alone with not much room for improvement there. With that portion of the engine in good shape it was time to move forward. The cylinder head was next.

First the cylinder head was built up through welding to increase the compression. Richard did this by hand with the head mounted in a lathe to create a better motor. It’s truly inspiring to watch an artist at work – there is some obvious talent there!

Hardly recognizable, the completed head with the machine work done is seen above and below. That center section was raised about 5/16”. Richard knew exactly what he needed for a finished measurement. Not satisfied with a simple port and polish job, Richard did a complete redesign of the cylinder head combustion area.

I was like a kid in a candy store having not watched somebody this good in more than 20 years. Richard is not a theory guy he is an “absolute 100 percent know how something works” guy. “You can’t make something better ‘till you know for certain how it works!” he declares.

The head was reinstalled on the engine with the engine back in the motorcar. The factory engine had steel head nuts and steel studs, which had seized to each other. When it was time to remove the cylinder head, all of the head bolt studs broke off in the block.

Richard made a tool to get the broken head studs out of the block and also machined this set of brass head studs on the lathe as replacements. No more seized head bolts.

The engine would almost pass for stock except for the head bolts…and until you start it. The original cylinder compression in a new stock Fairmont engine was 65 pounds. When I found it was down to 36 pounds. My engine today is just shy of 85 pounds.

The exhaust note “barks” a sharp crack every time the engine fires, gone is the mellow putt putt sound. These are hand crank start engines so cranking the engine admittedly, now a little more difficult, but well worth the trouble.

Another weak area of these engines is the crankshaft seals. Richard machined the original Fairmont casting to accept a modern two-piece seal that he made out of two automotive seals that he bonded together. Problem solved.

The stock piston out of a 1946 Fairmont 2-cycle engine is really a beast. Considering its shape and the fact that the piston weighs more than a pound, this presented a few challenges.

These engines remained the same design from introduction in the early 1920s until the mid-1970s when it was discontinued.

Although it may not look like it (see my Fairmont at the top of the opening page), I have completely gone through the car and rebuilt everything except for the body – I wanted to keep it original. This car was in service at Yates Center Kansas from 1946 until 1973.

When “that collector” comes calling in your shop, don’t just write his project off as a pipedream – even the smallest engine build can turn into an interesting challenge. And you just might learn something that can make you the expert in the future!My Fairmont is used in the rail yard in Blue Rapids, KS. This railroad line has two sections of track that are 2 percent grades for more than a mile each. My track speed used to be as slow as 5 mph by the time I got to the top of the grade. Now I run 20 mph all the way up the hill even with a strong headwind. Not bad for an engine design that is more than 90 years old!