Hubcaps used to be big business back when every car had them. The difficulty now is that finding the right ones for your classic Chevy restoration has been hit and miss despite thousands of images and information being available online. Well, H&H Classic Parts is doing its part to make it easier for classic enthusiasts. They have sponsored the creation of a new search tool that allows you to look up original hubcap sizes, specs, and images, many of which were captured from original brochures. It is essentially an online database of original Chevrolet wheel and hubcap info for the Nova II, Impala, Chevelle, Tri-Five, and classic Chevy trucks.

“Wheel covers are complicated,” says Tray Smith, Vice President of H&H Classic Parts, the company which sponsored the creation of the tool. “Chevrolet offered numerous wheel options for most of the models covered by our tool, from different wheel sizes to covers with and without spinners, with or without accent rings, etc. Collating this information was a massive undertaking,” says Smith, “but it’s the first resource of its kind for the classic Chevy community.” 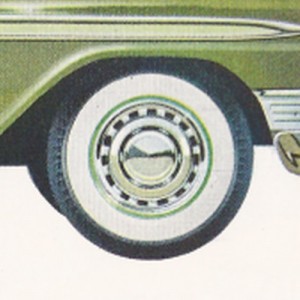 The tool was developed by Spork Marketing, which managed both research and web development to find accurate wheel and hubcap data, even going so far as to find and scan original vehicle brochures, according to Jason Lancaster, president of Spork Marketing. “We cross-checked our data by soliciting feedback from the classic Chevy enthusiast community online, and we received dozens of notes and suggested corrections.”

Lancaster says there have been many discrepancies in the past by enthusiasts over the accuracy of some of the original Chevy brochures.

“We’ve received dozens of notes from enthusiasts that directly disagreed with the information published in original Chevy brochures,” says Lancaster, “which just goes to show how complex this topic area can be, and perhaps suggests that not even Chevrolet’s own brochures were 100% accurate.”