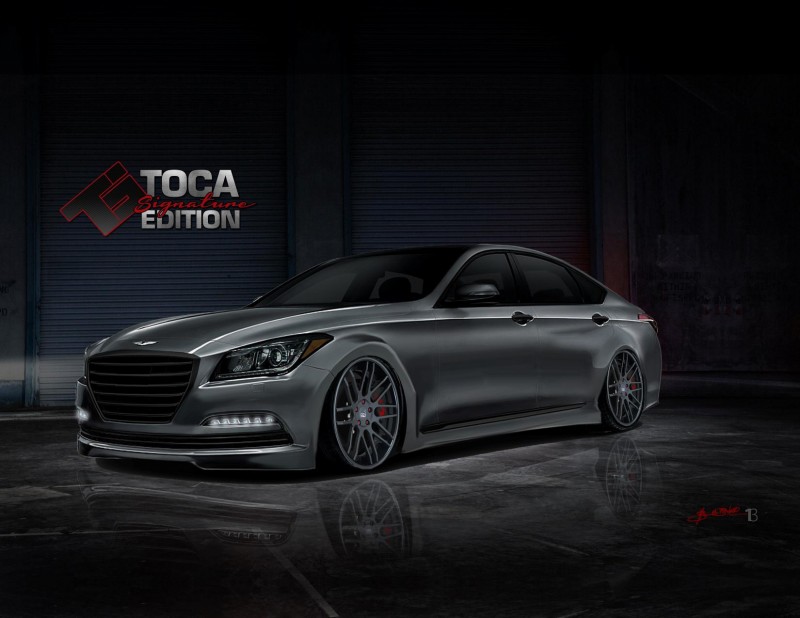 Toca Marketing Group, the Chicago-based design and customization company that strives to push the limits of aftermarket fabrication, has revealed its 2015 Genesisfor the 2014 SEMA show. In creating its latest Toca Signature Edition vehicle, the company has raised the Genesis’ performance and luxury benchmarks, creating a vehicle that breaks down barriers of innovation in the pursuit of perfection.

“The name ‘Steel Phoenix’ came to me as soon as I saw the redesigned Genesis,” said John Toca, founder and owner of Toca Marketing Group. “The main focus of this build was to zone in on the luxury aspect, while improving performance in parallel. Although I wasn’t overly concerned about pushing crazy horsepower numbers, the custom-fabricated twin turbo setup adds 180 horsepower over the stock motor. Whether you’re driving the car, sitting in the executively-appointed passenger and rear seats, or admiring the car from the outside, this Genesis is guaranteed to put a smile on your face.”

The interior has been given the executive treatment with custom black leather seats complete with contrasting white stitching, carbon-fiber trim panels and a Rockford Fosgate sound system. The vehicle has been refinished with a custom blend of BASF R-M products, giving the paintwork a steel, metallic appearance. Rounding off the exterior appearance, Toca fabricated a unique, all-metal wide body design with matte and gloss black accents.