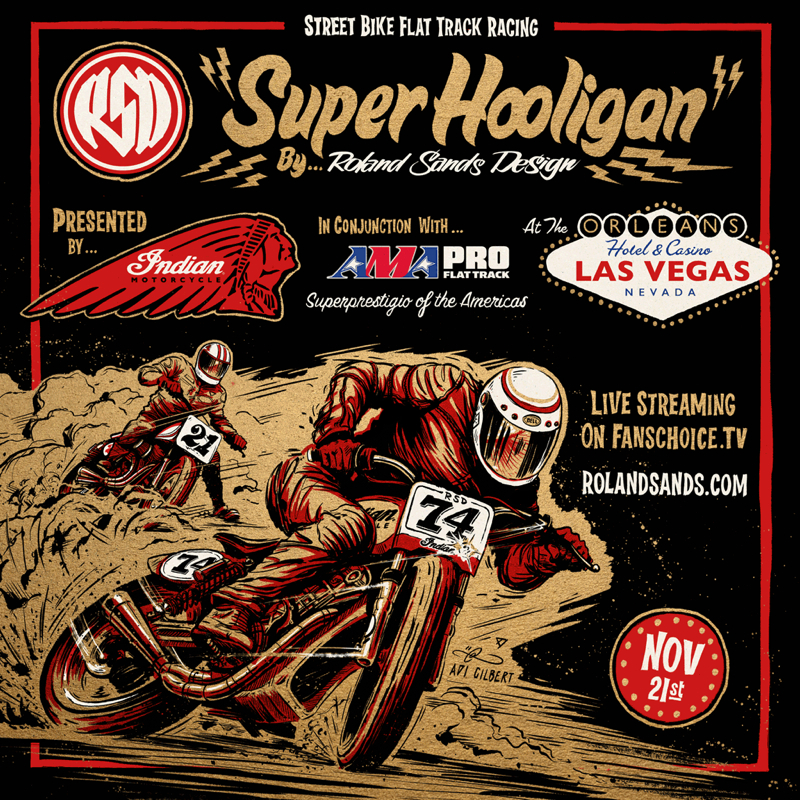 Indian Motorcycle has announced it has stepped up as the title sponsor for the upcoming “RSD Super Hooligan” flat track race in Las Vegas. The street-bike based race takes place indoors on a short track at the Orleans Hotel & Casino the evening of November 21, and is presented in partnership with Roland Sands Design and AMA Pro Flat Track in conjunction with the “Superprestigio of the Americas” race. The winner of the Super Hooligan race will receive a new 2016 Indian Scout – making the Super Hooligan race a bit more competitive than the average weekend amateur event.

Hooligan racing is traced back to the 1930s, at a time when legendary Indian Motorcycle dealer Clarence “Pappy” Hoel began organizing regional hill climb and flat track motorcycle races in and around Sturgis, SD. Hoel was a founding members of the Jackpine Gypsies Motorcycle Club, and he and the Gypsies are credited with starting the now world famous Sturgis Motorcycle Rally in 1938. Indian Motorcycle’s rich history in racing dates back to its inception with records in every racing category, including land speed, dirt track, transcontinental racing and venues like Daytona and the Isle of Man. In 1911 the Federation of American Motorcyclists published the records for 126 different categories of racing and different distances, and of those 126 racing records, Indian owned all 126.

Hooligan racing is a throwback to a post-war era where riders took virtually any available motorcycle to race in the spirit of seeking adrenaline and enjoying the comradery. Today the flat track Hooligan racing category is rapidly gaining in popularity with riders of all ages and experience levels because it brings the fun back into a less structured environment where any rider can race virtually any motorcycle. “Framers” or custom race chassis machines are not allowed in the class. It’s designed to allow racers to lightly modify an existing street chassis for racing action, a familiar situation for the world famous Indian Scout.

The company also announced it has partnered with Roland Sands Design to build and race five custom Hooligan racers based on the Indian Scout. The custom Hooligan Scouts will race in the RSD Super Hooligan event in Las Vegas, with a world-class team of riders that includes Roland Sands himself, Red Bull/KTM stunt rider Aaron Colton, plus some surprise guest riders. These new custom motorcycles will be revealed to the media on Friday, November 20 during the International Motorcycle Shows press event in Long Beach, CA.

“The Scout is a great machine upon which to base a custom bike with modern rider friendly performance. The engine and chassis are rock solid and don’t need a lot of work, so DIY customizers can focus on the aesthetic modifications,” said Roland Sands.  “It has been a blast designing and building these custom Indian Scout Hooligan bikes and after a quick test run at the local flat track I feel we have a competitive bike that will rip on the track.”

“It is an honor for Indian Motorcycle to sponsor the Super Hooligan event in partnership with Roland Sands Design and the folks at the Superprestigio of the Americas,” said Steve Menneto, President of Motorcycles at Polaris Industries. “Given the incredible racing heritage of the Indian Scout in our DNA, it’s really exciting to have five amazing Roland Sands custom Indian Scouts racing. It’s going to be a great event.”