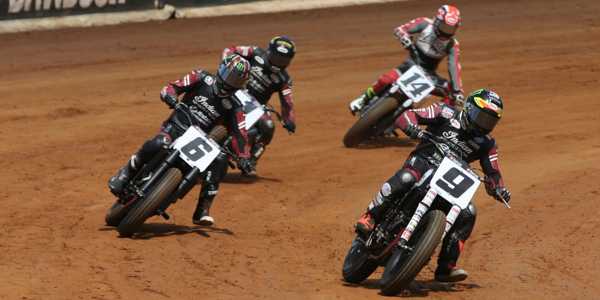 Although it looked like it was going to be Mees’ day to shine after he won both his heat, semi, and left everyone in his dust during the main, multiple red flags threw some uncertainty into the mix. And even after his teammate and championship rival Bryan Smith crashed out of the race – pretty much sealing the deal on the championship with Mees only needing four points – Mees didn’t go easy. He held on to the win and crossed the line 0.232 seconds ahead of teammate Brad Baker.

“Entering the year, our team goal was to be competitive and refine our purpose-built Scout FTR750 to eventually become a leading bike,” said Gary Gray, Vice President – Product for Indian Motorcycle. “It’s safe to say we’ve far exceeded expectation by securing the Manufacturer’s Championship through 14 races and now the AFT Championship through 16 races. It’s an incredible accomplishment by the entire Indian Motorcycle Racing team.”

American Flat Track recognizes a Rider Championship in each class. The rider that accumulates the most points in each class over the course of a season is declared the National Champion of the class. With only two races remaining, and Mees (342 points) ahead of the next racer – teammate Bryan Smith – by more than 50 points, Mees has guaranteed a Ride Championship.

Aboard the Scout FTR750, the Indian Wrecking Crew has combined for 35 of the season’s 48 total podiums, including six sweeps. Mees has nine victories on the season. Fellow Wrecking Crew Riders, Bryan Smith (276 points) and Brad Baker (247 points) will battle through the final two races of the season for second place.

Indian Motorcycle Racing, backed by Allstate Insurance, has its sights set on inching closer to a season sweep as American Flat Track returns to the Lone Star Half-Mile on September 23.