In its return to professional flat track racing after more than 60 years away from the sport, Indian Motorcycle Racing swept the 2017 American Flat Track Championship. Aboard the brand-new Scout FTR750 race bike, the Indian Wrecking Crew, consisting of Jared Mees, Bryan Smith and Brad Baker, finished the 2017 season with 14 total wins, 37 podiums and six podium sweeps. 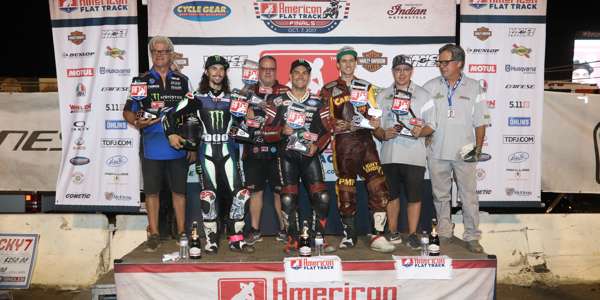 Mees, the 2017 Grand National Champion, finished the season just as he started in March at the Daytona TT – on the top of the podium. The win at the American Flat Track Finals in Perris, Calf. was Mees’ 10th of the season and set a new single-season record with 17 total podiums. Through 18 races aboard the Scout FTR750, Mees earned himself a career year and his fourth Grand National Championship.

“It’s been an unbelievable season with Indian Motorcycle. Since first testing the Scout FTR750 last year, I knew the bike was special and like nothing I’ve ever competed on,” said Mees. “I greatly appreciate all the love and support from my whole team, all the fans and of course my wife. It was a special season, and one I’ll look to top next year.”

“Countless hours from an incredible team went into building the Scout FTR750 race bike. And early testing showed we had something special,” said Gary Gray, Vice President – Product for Indian.  “Much of the credit goes to the Indian Motorcycle Wrecking  Crew of Jared, Bryan and Brad. We cannot praise these guys enough for all the work they put in during the season. It was a phenomenal year that vastly exceeded expectations, and we’re excited to carry this momentum to the 2018 season.”