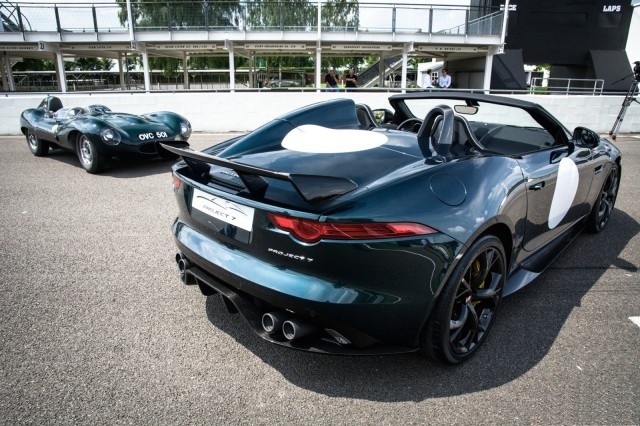 Jaguar Land Rover has formally announced that they are to debut three very special cars at the upcoming Pebble Beach Concours d’Elegance on Thursday August 14.

The 2015 Range Rover Sport SVR will have its world debut in full production form at Pebble Beach following its public debut as just a prototype at June’s Goodwood Festival of Speed in the U.K. Additionally, the U.S. production version of the Jaguar F-Type Project 7 will be revealed as will the very first prototype of the re-born missing six Jaguar Lightweight E-Types. While all three vehicles will be revealed at the Jaguar Land Rover night on August 14, they will also be on display throughout the weekend at a host of various events.

In case you aren’t update with the automotive world, all three of these vehicles come as a courtesy of the newly formed Jaguar Land Rover Special Vehicle Operations department. The Jaguar F-Type Project 7 represents the most performance-focused offspring of the acclaimed F-Type range and will be the greatest performance oriented Jaguar on the market. With 567 hp being produced from its 5.0 litre supercharged V8, the fully road-legal racer will hit 100km/h in just a measly 3.9 seconds and will keep pulling to a top speed of 300 km/h, only stopped by an electronic governor.

In a similar light, the Range Rover Sport SVR is the most performance oriented version of the Range Rover and recently set a new SUV lap record around the Nurburgring. It is propelled by a supercharged 5.0-litre V8 engine delivering a poweful 550 hp and when it reaches production, will also come fitted with a host of improved handling components including a better anti-roll system and stiffer suspension.