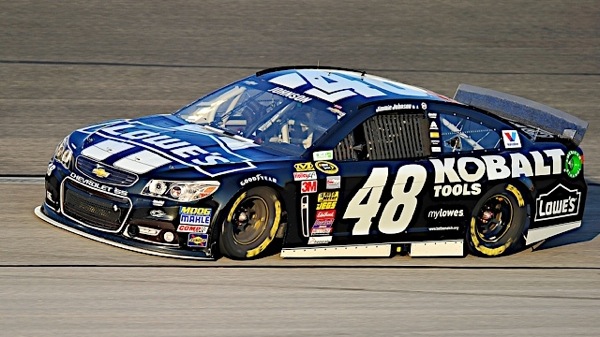 Jimmie Johnson and crew chief Chad Knaus rolled the dice and won in the closing laps of the rain-prolonged NASCAR SpongeBob SquarePants 400 at Kansas Speedway early Sunday morning, as the MOOG Steering and Suspension-equipped No. 48 Lowe’s Chevrolet held on for its Sprint Cup Series-leading third win of the season. Following the race, Knaus received his second “Problem Solver of the Race” award of 2015 from MOOG, the Official Steering and Suspension of NASCAR.

Knaus earned the weekly Problem Solver award based on the 48 Chevrolet’s race-best 0.650-second improvement in average lap time over the second half of the race while finishing on the lead lap. The weekly award and season-ending $100,000 MOOG “Problem Solver of the Year” Award are sponsored by Federal-Mogul Motorparts, a division of Federal-Mogul Holdings Corporation.

After starting 19th, Johnson reported that the Hendrick Motorsports-owned 48 car was “getting looser with every lap.” Knaus called for a series of chassis adjustments that paid immediate dividends, with the Chevrolet SS picking up 14 positions, from 39th to 25th, over the next 12 laps. Johnson advanced into the top 20 by Lap 60, the top 15 by Lap 90, and cracked the top 10 almost immediately following a 2-hour 16-minute rain delay after Lap 98.

Although the 48 car was getting progressively better, Johnson and Knaus felt they needed a strategic edge to beat Kevin Harvick and the MOOG-equipped No. 4 Chevrolet, which had led 53 laps. Their chance came after the race’s final caution with eight laps remaining. Harvick headed to the pits for a splash of fuel and two right-side tires while Johnson and Knaus opted for track position. The gamble paid off as Harvick, who restarted sixth, was able to regain all but the final 0.487-second gap behind Johnson.

“It was an exciting finish with a lot of behind-the-scenes strategy, and chassis setup played a huge role once again,” said Tim Nelson, director of motorsports for Federal-Mogul Motorparts. “Jimmie struggled early but Chad dialed in their MOOG-equipped steering and suspension during that first stop and then kept making it better over the balance of a very long night. Being able to hold off Kevin, who had the faster car and more rubber at the end, was a long shot, but the 48 team played it perfectly.”