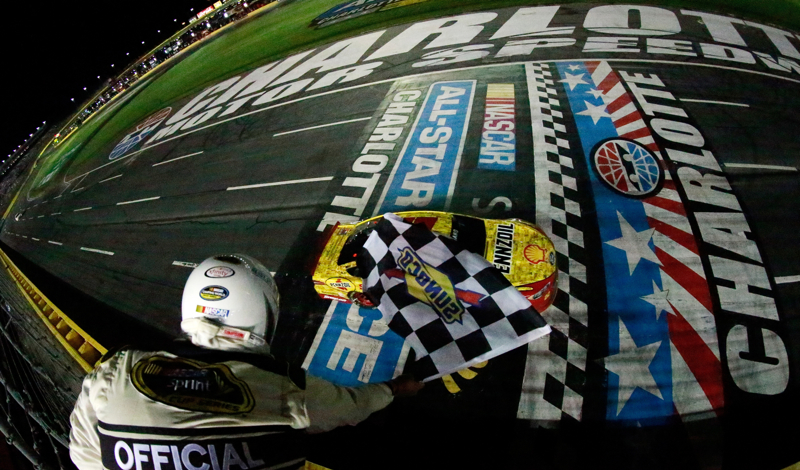 Joey Logano captured his first All-Star Race win at NASCAR’s hometown track, Charlotte Motor Speedway and took home the $1 million dollar check this past Saturday. Brad Keselowski in his Team Penske Ford finished second for an unprecedented 1-2 finish since the inception of the All-Star Race. As the exclusive Ford Performance engine builder for NASCAR, Roush Yates Engines in partnership with Ford Performance designed, tested and built the winning engine that powered the No. 22 to victory lane in the drama packed night.

Logano, driver of the Team Penske No. 22 made an impressive statement in his sixth appearance under the lights in Charlotte, taking the lead from Kyle Larson in the last two laps of the final 13 lap shootout. The No. 22 was able to endure the mayhem that ensued from the new 50-50-13 format and green track conditions. Completing the last mandatory pit stop for four tires, the No. 22 came out fast in the Ford Fusion powered by the Roush Yates Engines FR9 Ford V8 race engine. Using his new tires and horsepower to make a dramatic inside pass on No. 42, Larson to take the lead. The night will forever be known as “Midnight Mayhem” as Logano took the checkered flag just after midnight in his special edition 50th anniversary Penske mosaic paint scheme. As an encore, the No. 2 of Brad Keselowski came in second to record in history the first Team Penske one-two finish in an All-Star Race. This also marks Ford’s 30th anniversary win since its first with Bill Elliott in 1986.

“I thought our car was fast the whole time, we just didn’t really show the speed in our car until the end. It was definitely a long-run car as well,” Logano stated. “We needed speed and perfect pits. Thanks to Ford and Roush Yates Engines, we burnt her down at the end of this thing.”

“This was a great weekend for Ford Performance, Team Penske and Roush Fenway Racing,” said Doug Yates, President and CEO of Roush Yates Engines. “Joey and Brad both drove a great race and to see them come in first and second was exciting and provides great momentum going into the 600 next weekend.”