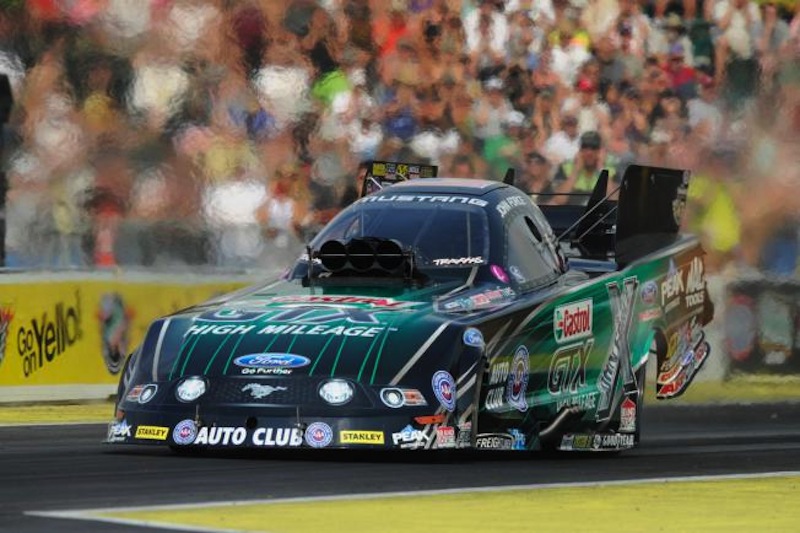 It was also John Force’s third win of the season and fourth consecutive final round appearance. Not only that, the Castrol backed John Force Racing Funny Cars can also claim a Western Swing sweep, as Robert Hight’s win at Denver, Courtney Force’s victory in Sonoma and now John’s success at Seattle have rewritten the NHRA record books.

“It’s great anytime you win but you got to look over there at the Castrol green Ford and all those kids around it. They’re really good, but what makes them really good is they team up with my other three teams with Traxxas and Auto Club and of course, the Castrol EDGE dragster. They all work as a team and that’s what makes it click and if somebody’s in trouble, someone’s helping Mike Neff, John Medlen, Ron Douglas, Todd Smith, Dean Antonelli, the lists goes on and on. It’s amazing how we all work as one team and we all share the money and that’s the way we keep it running,” said John Force.

Going into race day, John Force’s Castrol GTX High Mileage Funny Car had qualified in the No. 1 spot with an impressive 4.057 seconds at 307.86 mph. It was John’s fourth No.1 final qualifying position of the season, sixth at Pacific Raceways and the 150th of his career. Ten years ago Force won this race from the No. 1 position as well.

“I paced myself today and it was it was good day for Castrol, Ford, Auto Club, Traxxas, Peak and all my sponsors. It was a great Western Swing having my grandchildren up here. I think they’re bringing us luck,” said John Force.

John Force faced Jeff Diehl in the opening round of eliminations and even though Diehl qualified in the 16th spot, John Force wasn’t taking him lightly. These two competitors have faced each other three times in the past and just recently, two weeks ago at the start of the Western Swing at the Mile-High NHRA Nationals in Denver. Force is 3 – 0 against Diehl so he knew he’d be looking to even the score.

As the lights transitioned from yellow to green on the Christmas tree,  Force left the starting line first. Diehl gave chase from the starting line and could not keep up, as Force crossed the finish line first with a 4.102 second run at 307.58 mph to Diehl’s trailing 4.354 second pass at 282.36 mph.

Force then headed into the quarter-finals where he would face nemesis Cruz Pedregon. These two fiercely competitive Funny Car drivers have squared off against each other 93 times in competition with John Force winning 63 of those match-ups.

Once again as the Christmas tree flashed green, Force left first and went trucking straight down Pacific Raceways. Pedregon gave it everything he had, but the times said it all. John Force ran a 4.161 second pass at 302.48 mph to Pedregon’s losing 4.184 at 296.37 mph.

The stage was now set for a semi-final battle between John Force and Alexis DeJoria. These two drivers are no strangers, as they’ve battled each other 16 times before. John’s massive holeshot and great reaction time of 0.075 to DeJoria’s 0.170 that allowed him to get the win despite running a slower 4.301 second pass to her 4.252 run.

John Force did lose lane choice as he went into final round against another seasoned veteran and old teammate Gary Densham. These two drivers first raced each other 24 years ago in Montreal and over the years, they’ve raced each other a total of seven times in prior final round match ups with John getting four wins. Crew chief Jimmy Prock and the rest of the team had done their homework and carefully examined each run leading up the final match up. They made sure the lane John was in would be prime time and offer the best traction for his Funny Car.

Once again, John’s Mustang leapt off the starting line first, ahead of Densham and without missing a beat, crossed the finish line first with a 4.173 second run at 302.48 mph to Densham’s tire smoking 5.808 second at 120.44.

“I raced Densham 40 years ago at this track and we were having so much fun down there in the staging lanes. I know we’re supposed to be serious, it’s race day but when you’re racing a friend (Densham) and he comes up here on a budget and look how good he does, steps it up and races with these guys, and after only being out here few times all year and to get in the final is awesome for him. I always that I don’t mind losing to a teammate like Robert (Hight) or Courtney (Force) and when I’ve lost to Gary, I don’t mind as I feel he’s still a teammate,” said John Force.