For enthusiasts with ambitions in hot rod engine assembly, Jon Kaase has introduced the Boss Nine in a new kit form. 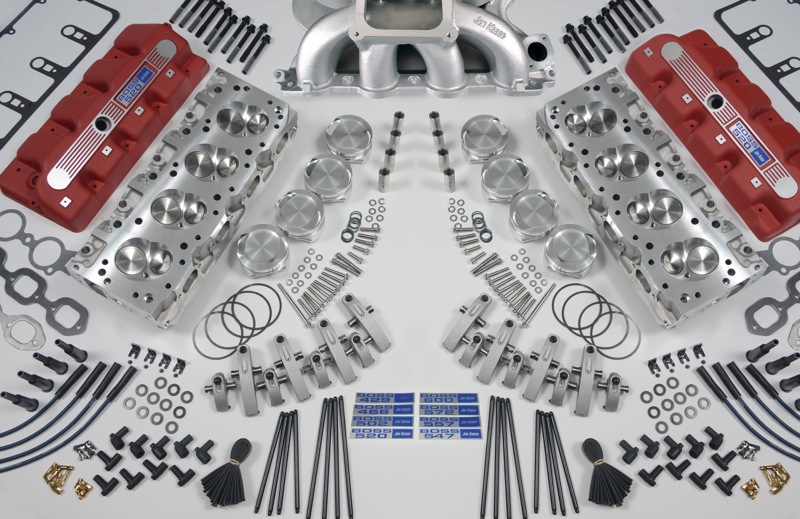 Among the kit’s more prominent components, Kaase includes his noted semi-hemi cylinder heads with accompanying pistons, pins and rings as well as pushrods, shaft-mounted rockers and induction system. Everything to complete the full assembly is supplied.

Though power production may vary from 500 to 1,000hp in naturally aspirated form and up to 1,500hp under forced induction, it is the engine’s evocative appearance and heritage that heightens its universal appeal. Predictably, options abound and powder-coated cast valve covers are available in silver, red and black. Indeed, in any color that can be identified by a paint code. In addition fabricated sheet metal covers are offered in natural aluminum finish.

In performance the Boss Nine’s magic is ignited by increasing its stroke length from the original late-nineteen-sixties specification of 3.590-in. “Those big-port heads,” contends Kaase, “don’t like stroke lengths shorter than 4in., and respond enthusiastically to 4.150-in, 4.300-in or 4.500-in, all of which we use.”

Because the longer 4.500-in stroke causes the piston to protrude from the cylinder at bottom dead center, Kaase recommends a Race block or a “79” block, which has a .250-in longer cylinder wall. Produced from 1979 to the mid-’90s these can be identified by the nomenclature D9 on the block’s external surface. “They’re robust,” declares Kaase, “and we have one at the shop. It is .030-in over-bored with 2-bolt main bearing caps and has taken the abuses of fourteen years of dyno testing. It usually generates between 900 to 1,000hp and we’ve used it on all Boss Nine and P-51 tests—it’s still going strong.” 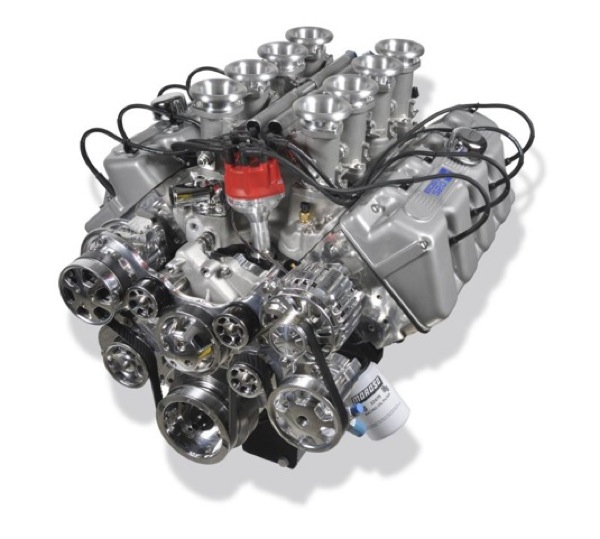 First flush of life in 2008, forty years after the original Boss 429 Mustang
To appreciate the full measure of the Boss Nine it is helpful to return to its origins. “I never planned on building a Boss 429 head,” says Kaase, “until driving back from the Engine Masters Challenge in 2007. Though virtually everything we’d built at my shop had been a derivative of that engine, I knew if we used stock parts in an EMC contender it would fall apart. So we decided to build it with new, revised components. This approach allows anyone to build the engine using the popular passenger car 385-series block. It seemed a commonsense approach, but we wouldn’t have started the venture if not for the EMC. And six months later we would have dismissed the entire project because the banks were failing and everyone worried if they’d still have a job!”

Despite the racing successes of the original Boss 429 Mustang the semi-hemi cylinder heads were weak. The combustion chambers cracked and their thin decks leaked around the O-ring head gaskets. Also the original intake valves suffered premature wear as the unusually short rockers with poor operating geometry caused them to hammer the seats.

“Most of the revisions applied to the Boss Nine,” explains Kaase, “were incorporated to make it stronger and easier to work on.” The deck thickness of the cylinder heads (about .625-in) is greater than the original and though the valves reside in the same place, the rocker arms attach to the head in a more simplified manner, making the assemblies less expensive.

Also, the exhaust rockers are a little longer, which moves the pushrod away from the deck. This revision improves pushrod clearance and eliminates grinding the block close to the water ports. Moreover, the Boss Nine combustion chambers are a little more efficient.

For enthusiasts looking forward to a romp through the springtime landscape, 429/460 BBF engines are readily available and inexpensive ($100) and the Boss Nine now flourishes in kit form.