There is a great interest in the cars that played roles in the life and death of John F. Kennedy, who was assassinated 50 years ago this month. The production line Lincoln convertibles that the Kennedy clan drove around Hyannisport, Mass., the custom made Lincoln parade car that he was shot in on Nov. 22, 1963, and the U.S. Navy Pontiac ambulance that picked up the flag-draped coffin all have a place in American history.

The Kennedy death car is part of the Henry Ford Museum collection in Dearborn, Mich. The gray ‘63 Pontiac-Superior ambulance caused controversy and interest when it was offered for sale at the well-known Barrett-Jackson Auction in Scottsdale, Ariz., a few years ago. There are many “Kennedy Lincolns” in other collections, such as Wayne Lensing’s Historic Auto Attractions Museum in Roscoe, Ill., which also has the white 1962 Ford ambulance that took Lee Harvey Oswald to the hospital after Jack Ruby shot him.

Kennedy is often said to have had a love of Lincoln automobiles, but in his book Presidential Cars & Transportation, William D. Siuru, Jr. states that his research proved JFK really had no personal preference in cars. When it came time to replace an aging custom-built Lincoln bubbletop constructed in the early ‘50s, the Secret Service went to Ford in Dearborn and limousine conversion company Hess & Eisenhardt in Ohio for a replacement presidential parade car. The result was an open-top Lincoln that became known as the X100.

Siuru found the car started as a ‘61 Lincoln Continental four-door convertible. After being heavily reworked, it made its presidential debut in the middle of June 1961 at a cost of about $200,000. Ford leased the car to the White House for $500 a year. It was designed to be used as an open convertible, a bubbletop or a partly fabric-top convertible. The X100 was the car that Kennedy rode in when he was assassinated in Dallas. During Kennedy’s brief time in office, numerous other Lincolns, especially Lincoln-Continental four-door convertibles, were pressed into use to transport the president, his family and his entourage. After the Kennedy assassination, the X100 was reconfigured and used by president Lyndon B. Johnson. Today thousands of people flock to see it each year at the Henry Ford Museum. 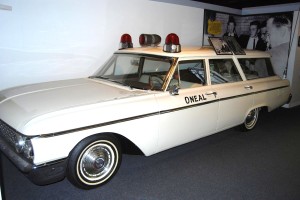