A bumper-to-bumper guide with a plethora of information about your car with funny stories blended in for a chuckle!  Our cars are the second largest investment that we make in life and knowing how to take care of them will extend the health of our cars.

“Kenny’s Garage” will be priced at $9.95 for Paperback and $5.99 for eBook, making it affordable for everyone! 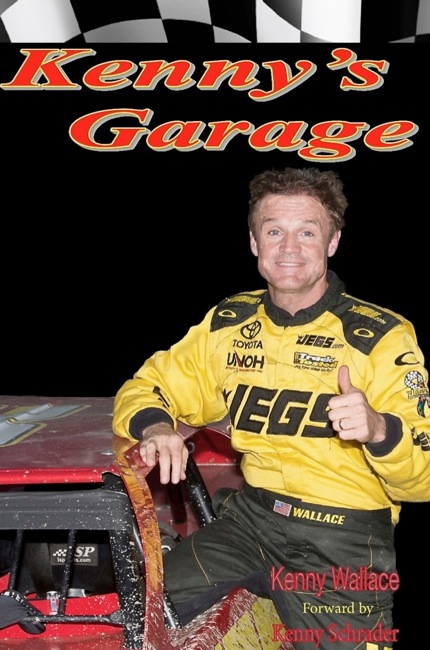 About Kenny Wallace:
Kenny Wallace won the first race he ever entered in 1982. After winning that first race, Kenny decided that his place in racing was in the driver’s seat. In 1986, he joined the ASA ranks winning Rookie of the Year honors. Kenny is the youngest of the three Wallace boys, and racing was a household reality before any of the boys could drive a car. He is the winner of the first Tony Stewart “Prelude to the Dream” at Eldora Speedway in 2005.

Kenny is the only driver to have won the Nationwide Series Most Popular Driver Award three times, Kenny ranks number one with the most starts in NASCAR Nationwide series history with 9 wins in this series. Kenny’s most well-known finish came when he pushed the late great Dale Earnhardt to his final Cup victory at Talladega in 2000 in a thrilling last lap shootout. Kenny ranks 13th out of 4000 drivers in the overall history of NASCAR starts with 900!

Kenny is the co-host on NASCAR Raceday, NASCAR Victory Lane, and NASCAR Coverage on FOX Sports 1 each week. With his competitive battles on the racetrack and popularity on television, he has become one of the most sought after drivers in NASCAR racing for sponsor endorsements and speaking engagements.

Kenny is a driver that is well respected by owners, drivers and sponsors throughout the garage area and racing community. Almost any weekend, you can find him getting back to the roots of short track racing in his #36 dirt modified race car.

In Kenny’s words: I have compiled my lifelong history with cars, trucks, tractors; you name it.

I will warn you, working on your car and feeling empowered can be very addicting. Learning to change your oil for the first time is as easy as baiting a hook or making Macaroni and Cheese.