Camry driver Matt Kenseth retook the lead in the waning laps at Phoenix Raceway to claim a Monster Energy NASCAR Cup Series victory in the penultimate event of 2017 as he prepares to step away from racing.

Kenseth was passed by Chase Elliott in the closing laps, but started closing on the leader in the final 15 circuits before passing Elliott for the triumph. 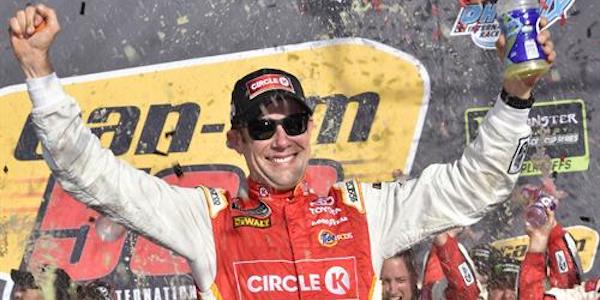 “It’s really not describable,” Kenseth said from victory lane, “With only two left, I didn’t think we were probably had a good chance of getting back to victory lane. It’s been I don’t know how many races – somebody’s probably going to tell me tonight – but it’s been at least 50 or 60, so it’s been a long time. We’ve had a lot of close ones. Just felt like it was never meant to be and today it was meant to be.”

The victory marked Kenseth’s first win of 2017 – the 18th full-time season for the 2003 NASCAR Cup Series champion – and comes just one week after the Camry driver confirmed he is stepping away from racing in 2018. Understanding he may only compete once more in the top level of NASCAR, Kenseth’s emotions were overflowing during the victory lane celebration.

“What a storybook ending,” Kenseth explained. “I wasn’t sure that I was ready for this and to move onto something next year, but honestly God made the decision for me – he put me here for a reason and he’s taking me out for a reason. It’s been an incredible journey and there’s no way you could write it any better than this.”

With one race remaining in 2017, Busch and Truex are set to compete in the Championship 4, the group of four drivers eligible to win the driver’s championship, in the season finale at Homestead-Miami Speedway on Sunday, Nov. 19.