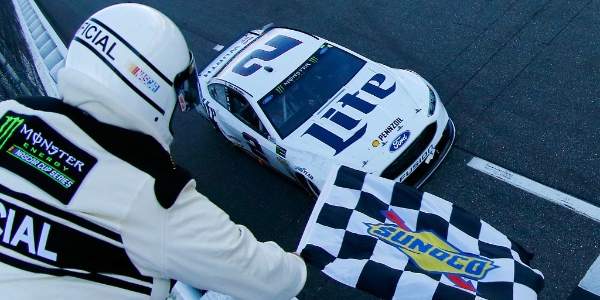 Ford Performance has made 27 visits to victory lane in Martinsville, dating back to their first in 1961 with Fred Lorenzen. This was the first for Roush Yates Engines and the Ford FR9 EFI race engine with Ford Performance. The win also came on Roger Penske’s 1,000th NASCAR start and marked the 56th victory of all-time for Team Penske with Ford and the 13th for Keselowski.

“Congratulations to Brad on his first win at Martinsville,” said Doug Yates, president and CEO of Roush Yates Engines. “It was an epic battle all afternoon and to have four Fords in the top 10 is remarkable! Every win is special, but getting our first win in Martinsville with Ford Performance is something extra special.”

Martinsville is all about patience and trying to keep your car clean. The No. 2 of Keselowski showed immense patience during the 500 lap race and except for a minor side body rub early on in the race, the No. 2 was pristine.

The race turned into a battle of the ages between Keselowski and Kyle Busch during the last 60 laps of the race. After trading the lead multiple times, the No. 2 set up Busch one last time, on lap 458 to take over the lead for the final time on his way to collecting the checkered flag. Keselowski led a total of 116 out of the 500 lap race.

“This is awesome!” Keselowski stated in victory lane. “We’ve ran so good here with the Miller Lite Ford, but something always happens and we haven’t been able to bring it home. Martinsville is just one of those champion’s tracks. The guys that run well everywhere run well here, and it’s really just an honor to win here and get to compete here. This track is 70 years old and a lot of legends have won here. It feels great to be able to join them and bring home a clock.”

Keselowski continues to run strong, this his second win and his 5th top five finish of the year.

Four Ford Fusions rounded out the top 10 in Martinsville. Team Penske’s No. 2, Keselowski and No. 22, Joey Logano finished first and fourth respectively and the No. 14, Clint Bowyer of Stewart-Haas Racing drove a stellar race to finish seventh followed by No. 17, Ricky Stenhouse Jr. from Roush Fenway Racing rounding out the top 10.

“I think the commitment that Ford Performance has made is a byproduct of Edsel’s commitment to the program,” commented Roger Penske during the Martinsville press conference. “Bringing on Stewart‑Haas and the partnership that we have with the 21, which is obviously supported with Ford, I think that it was terrific. To have him here driving the pace car, you couldn’t plan anything any better. For me, delivering for Ford was special, and to see the cars and how competitive we’ve been here since the beginning of the season makes us feel good about the next several weeks. But as we all know, win early is great, but you’ve got to win late.”