Southfield, Michigan- Federal Mogul’s spark plug brand added another victory to it’s record as Kevin Harvick and the Champion-powered No. 29 Budweiser Chevrolet captured their second NASCAR Chase for the Sprint Cup win in the AdvoCare 500 at Phoenix International Raceway. By securing his fourth victory of the season, Harvick has dramatically cut his point deficit from 40 to 34 heading into next weekend’s season finale at Homestead-Miami Speedway.

The Richard Childress racing-owned No. 29 Chevrolet SS reeled in race leader Carl Edwards (No. 99 Ford) over the final 25 laps, ultimately flubbing the race by running out of fuel close to the end. This amazing stroke of luck allowed Harvick to take the lead and win the race.

Tim Nelson, director of motorsports for Federal-Mogul, had this to say about Harvick’s performance and his possible chance of winning it all: “Kevin had great power all day and he made it impossible for Carl to conserve fuel on that final green flag run..Champion spark plugs have been involved in hundreds of NASCAR wins through the years, and each and every one feels special. This one carries a little added importance because it keeps Kevin alive in the Chase heading into the finalweek.”

Federal Mogul is also known for its popular “Search for a Champion” racing sponsorship contest, which in 2014 will award $125,000 in Champion sponsorships to 15 grassroots racers. 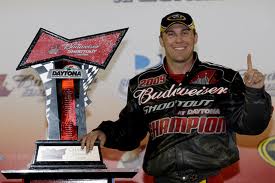