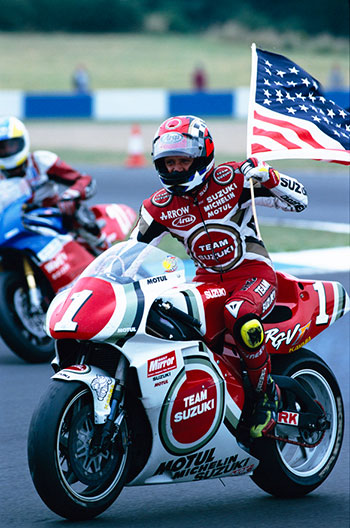 Donington Park is getting ready to welcome motorcycling legend and 1993 500cc World Champion Kevin Schwantz to the circuit, as he joins in the celebrations at the Classic Motorcycle Festival this August.
Schwantz, a long-time Suzuki legend, won a number of Grand Prix on Donington Park’s world-famous track, and is looking forward to returning to ride at the scene of so many great victories.
Speaking ahead of his visit, Kevin said: “I am really looking forward to going to ride at the 2014 Classic Motorcycle Festival at Donington Park. Donington is a place where I’ve won so many Grand Prix and Transatlantic Match races, and I have great memories of racing there. It goes without saying that it holds a very special place in my heart, as do all the English fans.”
Bob Adams, Circuit Manager at Donington Park, added: “This is a great coup for Donington Park and we can’t wait to welcome Kevin to the Classic Motorcycle Festival. It’s 20 years since Kevin’s last win here, and with the help of Team Classic Suzuki owner, Steve Wheatman, we’re even going to reunite Kevin with his favoured 1994 XR84 Lucky Strike Suzuki – No. 1 plate.
“Seeing Kevin take to the famous curves of Donington Park once more is an absolute must for any motorcycling fan. He’s a hero to so many and die-hard enthusiasts will be pleased to know that he’ll be demoing a range of fantastic bikes over the course of the Classic Motorcycle Festival weekend.”
Schwantz was a leading light in the golden era of 500cc GP racing, battling not just arch rival Wayne Rainey, but also the likes of Mick Doohan and Eddie Lawson on his way to 25 500cc victories. That’s more wins than four-time world champions Duke and Surtees and triple world champions Rainey and Roberts.
As part of his visit to Donington Park Kevin will also hold autograph sessions and ‘An evening with Kevin Schwantz’ is also due to take place in the Donington Grand Prix Collection. Further details are set to be released in the near future.
The Classic Motorcycle Festival takes place on August 8-10.
Show Full Article