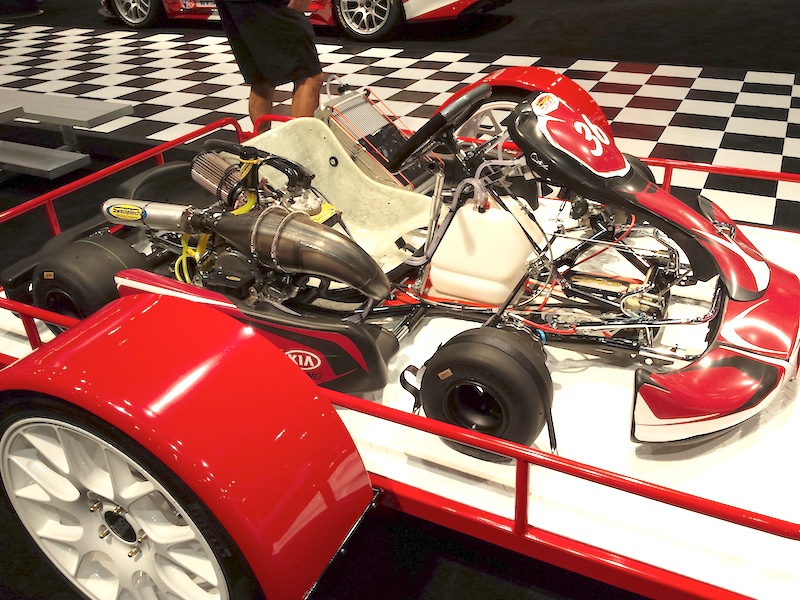 Kia Motors America (KMA) today brought the sights and sounds of the race track to the opening day of the 2014 Specialty Equipment Market Association (SEMA) Show.  Just five years after the brand boldly announced its intention to enter professional motorsports in the U.S. at the 2009 SEMA Show, KMA marked its second title-winning season, celebrating the 2014 Pirelli World Challenge Manufacturers Championship.  Kia’s “A Day at the Races” 2014 SEMA display commemorates Kia’s racing success and demonstrates the imprint motorsports has left on the brand’s DNA, encompassing both the thrill of high-speed competition as well as the fun and excitement that fans experience trackside.

“Competing – and winning – in the Pirelli World Challenge series allows Kia to provide tangible proof of the quality, durability, reliability and performance of the vehicles we build,” said Michael Sprague, executive vice president, sales & marketing, KMA.  “This year’s SEMA show gives us the opportunity to celebrate our hard-fought championships while also embracing the fun and excitement of the fan experience in a way that only Kia could do.”

While two of the vehicles are inspired by the festive atmosphere fans of the Kia Racing team experience during a day at the track with family and friends, the others pay homage to the raw performance and unique style that has permeated Kia’s five years of U.S. racing success.  And at the center of it all is the championship-winning Optima race car, sporting a new look for the 2015 season. 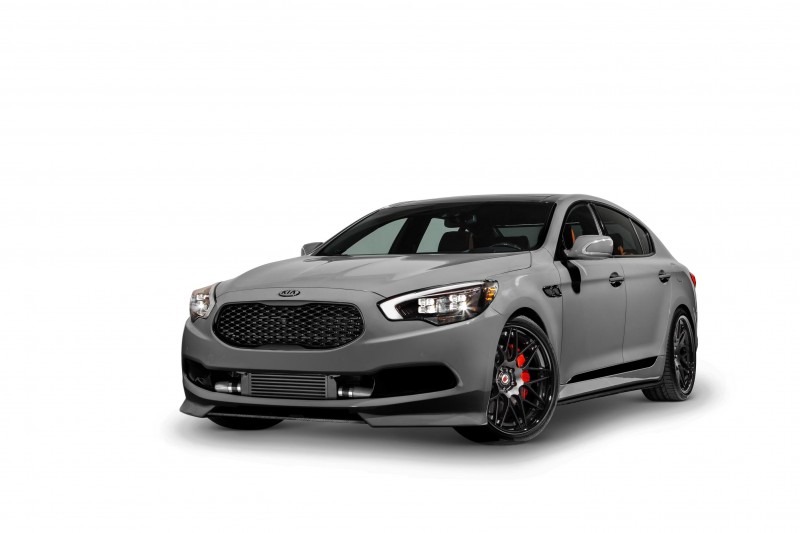 Team owners and drivers regularly arrive at tracks around the country in performance-oriented luxury vehicles.  Like their race car brethren, these vehicles are often customized to wring every last ounce of performance from their OEM roots. They sport modifications to the exterior, interior, wheels, tires, brakes, suspension, and engine—all in the name of more power and improved driving dynamics.  Kia Racing drivers, Mark Wilkins and Nic Jönsson, consulted with LUX Motorwerks, providing input into the kind of vehicle they would like to drive to and from the track, and the result is the High-Performance K900 debuting at today’s SEMA Show. 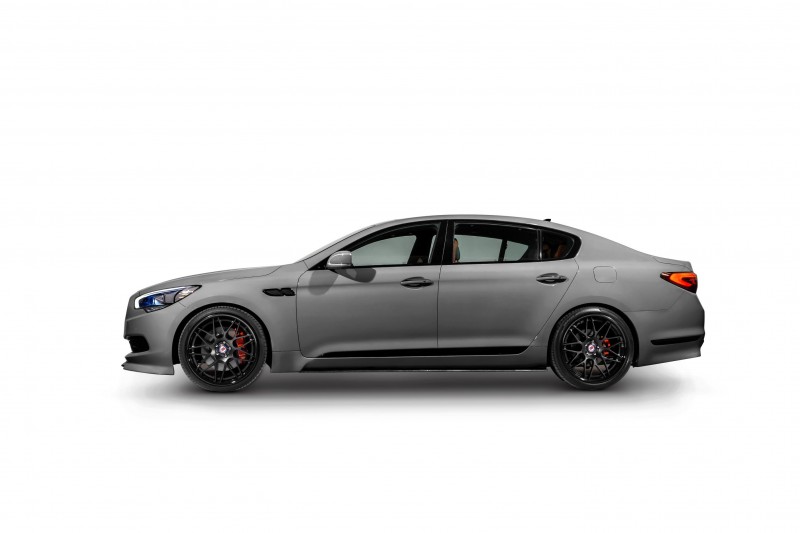 The interior features luxurious tan leather seats with black suede accents and bespoke touches such as 11-inch seatback monitors showing in-car footage from iRacing.com Motorsport Simulations to allow rear-seat passengers to learn or refresh their knowledge of each track’s all-important racing line while en route to the circuit.  In the trunk are custom compartments for a driving suit and helmet, complete with a ProDryer to remove perspiration following a long day of hard work behind the wheel.

The High-Performance K900 adds a professional-grade boost to the stock vehicle’s 420-horsepower, five-liter V8, thanks to a unique Garrett 2871R twin-turbo application visible through a viewing port in the trunk.  With an estimated output hovering near 650 horsepower, the turbo units’ unconventional placement helps reduce engine compartment heat build-up under full throttle and doesn’t require the removal of any sheet metal beneath the sculpted lines of the hood.  A lowered Eibach suspension keeps this special version of Kia’s flagship sedan planted and level, and Ksport 8-piston brakes paired with 15-inch cross-drilled rotors offer the confidence of control.

The High-Performance K900 ensures the drive to and from the track is as exciting as the drive around it. 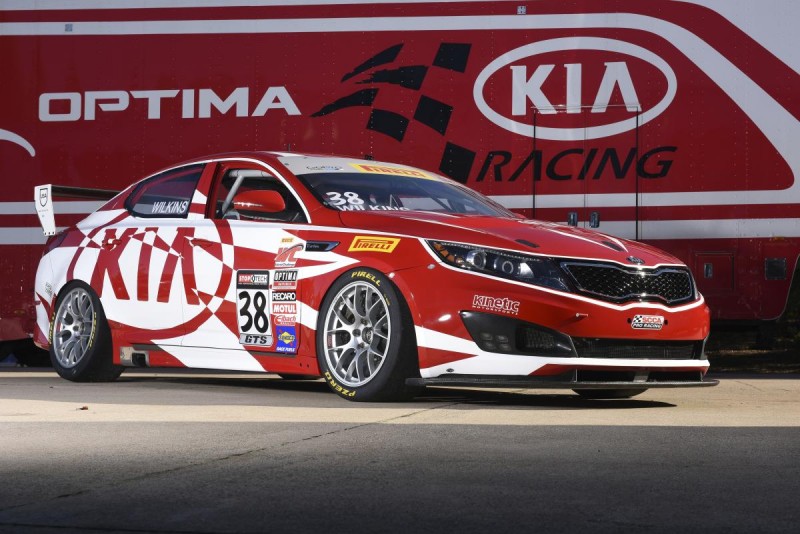 First shown at the 2011 Los Angeles Auto Show, when Kia Motors America announced that it would augment its championship-winning Forte Koup racing program with an entry into the Pirelli World Challenge, this championship winning Kia Racing Optima features an exciting new livery for the 2015 racing season.

Kia Racing clinched the 2014 Pirelli World Challenge Grand Touring Sport (GTS) Class Manufacturer Championship in only its third season of competition.  Kia defeated rivals Ford, Chevrolet, Porsche, Aston Martin and Nissan to become the first Korean auto manufacturer to win the coveted championship.  Kia Racing finished the stellar season with 13 podium finishes, including 5 race wins. Meanwhile, the turbocharged Optima race cars led more on-track miles than any other manufacturer in the class this season, a testimony to the speed and reliability of the Kia Optima.

The No. 38 B.R.A.K.E.S. Optima turbo on display at SEMA was driven by Mark Wilkins throughout the 2014 season and utilizes the same 2.0-liter turbocharged four-cylinder GDI engine found in the Kia Optima SX and SXL.  The engine block, head and crank shaft are stock Kia parts.  Power output has been increased from the stock 274 HP to about 368 HP and is routed to the front wheels via a six-speed sequential transmission.  The Kia Racing Optima weighs 2,950 pounds and has a top speed of 160 mph.

Not only do Kia Racing’s performances reinforce the quality and dependability of Kia’s vehicles against the very best under the most extreme conditions, they support and increase awareness for two important charitable organizations.  B.R.A.K.E.S. (Be Responsible and Keep Everyone Safe) provides free advanced driver’s education to teenage drivers with the goal of preventing injuries and saving lives. DonorsChoose.org is an online charity devoted to helping public school students in need of learning materials.  Teachers post classroom project requests, and donors give to the projects that most inspire them.